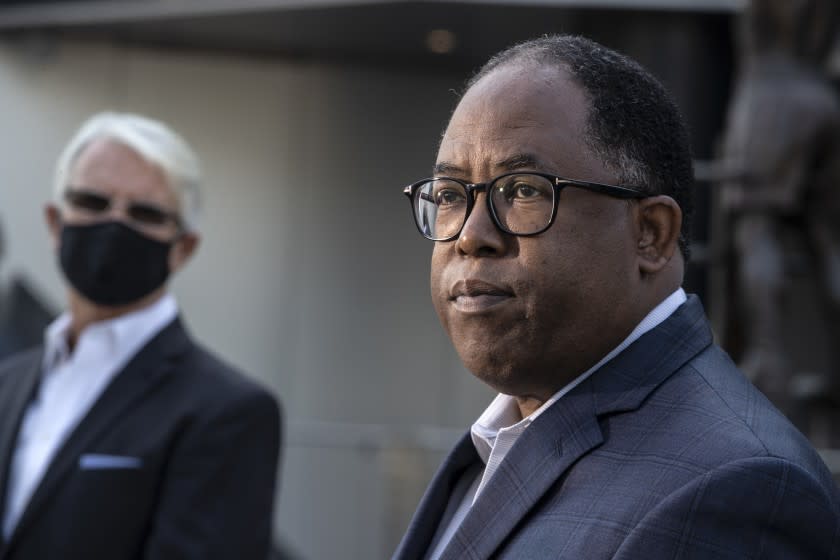 Ridley-Thomas’s team responded by sending Yoo a cease-and-desist letter that accuses her of “cybserquatting” and defaming him with the website.

“You have intentionally prevented our client from registering a website domain name in his own personal name,” wrote Stephen J. Kaufman, attorney for Ridley-Thomas, in an Oct. 9 letter.

“And, by illegally setting up this website, you have confused and lured unsuspecting members of the public who were seeking to access online information from our client to your own fraudulent website in order to assault them with false and defamatory statements about Supervisor Ridley-Thomas.”

Ridley-Thomas and Yoo were the top vote-getters in the March election, pushing them into a November runoff for the 10th District, which stretches from Koreatown to the Crenshaw Corridor and takes in such neighborhoods as West Adams and Mid-City.

The race is turning out to be an insider vs. outside face-off, with Ridley-Thomas highlighting his decades-long experience in political office and Yoo casting herself as a fighter for regular citizens.

“Defamatory? Give me a break,” Yoo said. She said the website makes clear that it isn’t run by Ridley-Thomas. Yoo said she registered the domain name in May 2020 after discovering it was available.

Ridley-Thomas’ attorney also last week sent a letter to the director of the city’s Ethics Commission, accusing Yoo’s campaign of failing to file in a timely manner copies of campaign materials with the city. The letter was provided by Ridley-Thomas’ campaign.

City law requires candidates that send out campaign advertisements to 200 people or more to file copies of those advertisements with the city within 24 hours. Yoo distributed door hangers, lawn signs and digital advertisements in late September but failed to report them to the city, according to Kaufman’s letter.

“We, therefore, request that the city Ethics Commission investigate and prosecute these violations of the city’s campaign disclosure laws,” Kaufman wrote.

Yoo said Tuesday that she reported the digital advertisement with the city in a timely fashion.

Yoo said the door hangers were left over from the primary race. She said she already filed documents with the city about the distribution of those hangers during the primary, but is investigating whether she needs to file additional documents.

She said the lawn signs were also left over from the primary and she gave out less than 120 of them.