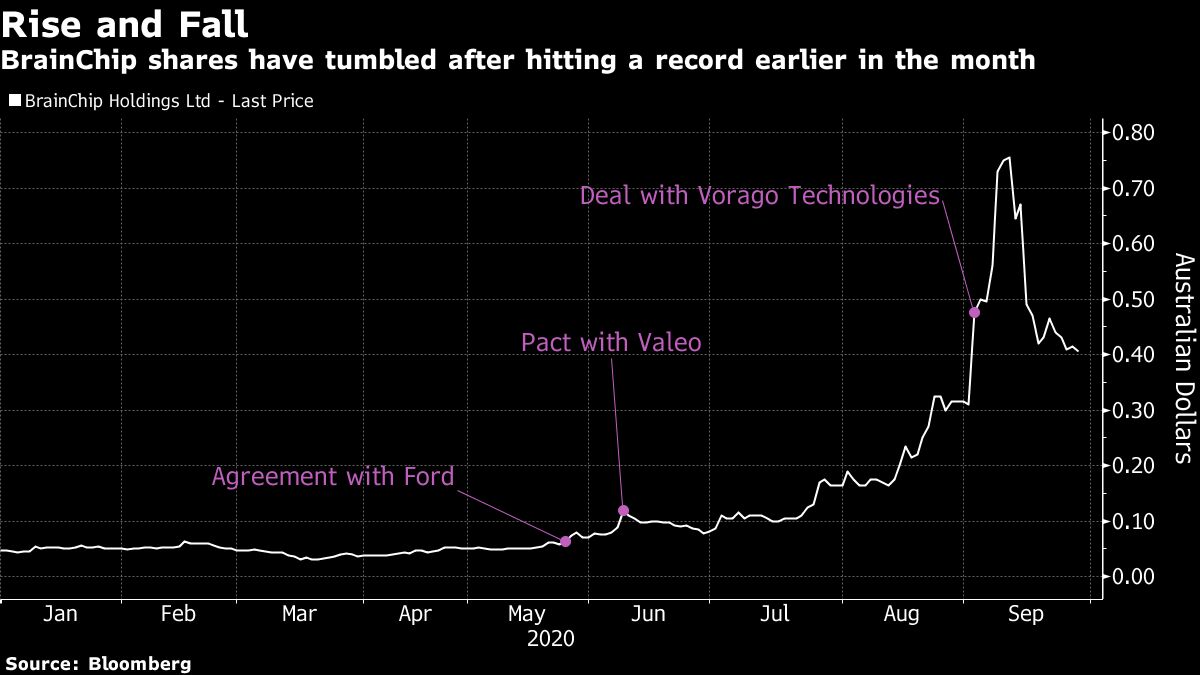 A meteoric rally in an Australian penny stock is fast unraveling after confounding not just market watchers but also the company’s CEO.

BrainChip Holdings Ltd., an artificial intelligence-focused startup whose flagship product is yet to be made widely available for commercial use, saw its 2020 gains propel to 1,500% earlier this month. While concerns about overheating have seen the stock getting hammered since, its 762% advance year-to-date still makes for one of the best performances among technology names in Asia Pacific, according to data compiled by Bloomberg.

“I was surprised about the peak” Louis DiNardo, BrainChip’s chief executive officer, said in an interview. “Shares were overbought for a company that’s just introducing its product.”

BrainChip is one in a long list of global technology stocks that have surged this year as the pandemic put investor spotlight on companies focused on technological innovation. BrainChip is developing a processor, Akida, that can be used for edge computing — which involves handling complex AI and machine-learning tasks at the so-called edge of the network instead of sending data back and forth to servers.

Shares have skyrocketed as the company signed a slew of partnerships over the past few months, including an agreement with Ford Motor Co. in May for the evaluation of the Akida chip. Texas-based Vorago Technologies this month agreed to participate in its “early access program” which allows select few to test new features and give feedback before a device is rolled out to customers as a whole.

Jun Bei Liu, a portfolio manager at Tribeca Investment Partners Pty in Sydney, isn’t surprised by the sharp correction in the share price, which she says reached astronomical levels after retail investors hyped the stock on online forums such as Reddit.

Brainchip has seen multiple discussion threads on company’s business outlook and stock moves over the past few months on the Reddit website.

“Brainchip have early movers advantage where we are a few years (apparently) ahead of competitors like Intel etc. And Patent protection,” Fralgeen, one of the users on Reddit, wrote in a thread some 20 days ago according to the website. “I’m holding at 700% gains and buying in at most dips,” Fralgreen’s post added.

But there are some who are optimistic about the firm’s future prospects.

“The potential for this technology to take off longer-term is very real because it addresses a number of issues in edge computing,” said Marc Kennis, managing director at Pitt Street Research Pty, who says BrainChip’s stock is fairly valued. “The next leg up will be determined by commercial progress,” he said, adding that it’s possible for the stock to get back to its peak.

BrainChip’s processor can be used in applications for homes, transportation, health and the industrial sector, DiNardo said, adding that the company plans to commercialize it in Japan, the U.S., Europe and Australia.

— With assistance by Edwin Chan, and Abhishek Vishnoi