From Spaceflight launch deal to a newborn fellowship

Home / From Spaceflight launch deal to a newborn fellowship

From Spaceflight launch deal to a newborn fellowship 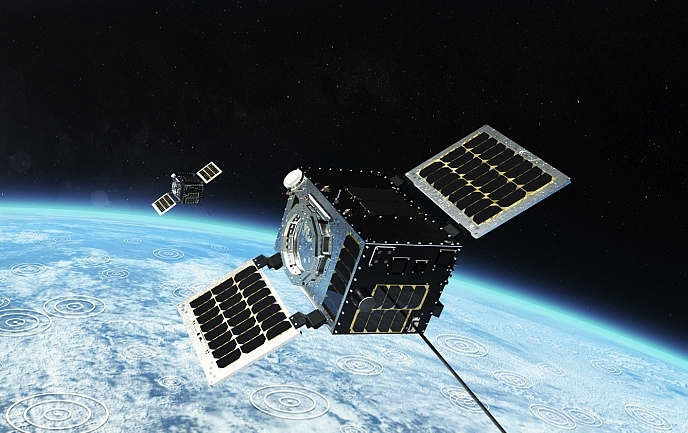 Spaceflight will provide mission management services for HawkEye 360’s Cluster 4, 5 and 6 launches. Each cluster consists of three 65-pound satellites that fly in formation to gather a wide variety of geolocation tracking data. SpaceX sent HawkEye 360’s first cluster into orbit in 2018 as part of a dedicated-rideshare mission organized by Spaceflight. Cluster 2 is scheduled for launch as soon as December on a SpaceX Falcon 9 rocket that’s equipped with Spaceflight’s Sherpa-FX orbital transfer vehicle.

The antennas will support Swarm’s next wave of satellites, part of a 150-unit constellation that’s due to go into full operation by the end of 2021. The first antenna included in the agreement has been placed on Alaska’s North Slope and is supporting the latest group of satellites to be deployed. Those 12 satellites, each about the size of a slice of bread, were sent into orbit on Sept. 2 by an Arianespace Vega rocket.

Plans call for additional Swarm antennas to be activated and hosted by RBC Signals in strategic locations around the world. RBC Signals, founded in 2015, takes advantage of company-owned as well as partner-owned antennas to provide communication services to government and commercial satellite operators.

— Bothell, Wash.-based Tethers Unlimited says it has completed a critical design review for its MakerSat payload, which is due to fly aboard a NASA mission aimed at testing in-space servicing and manufacturing technologies in the mid-2020s.

MakerSat will be part of Maxar Technologies’ Space Infrastructure Dexterous Robot (SPIDER), one of the payloads attached to NASA’s OSAM-1 spacecraft. (OSAM stands for On-orbit Servicing, Assembly and Manufacturing). SPIDER is designed to assemble a communications antenna in orbit, while MakerSat will manufacture a 32-foot-long, carbon-fiber construction beam.

The project will test techniques for use on future space missions. “MakerSat will demonstrate the manufacturing of the 2-by-4’s that can be used to construct large telescopes for studying exoplanets and to assemble future space stations,” Tethers Unlimited’s founder and president, Rob Hoyt, said in a news release.

— The application window has opened for the Patti Grace Smith Fellowship, a new program that offers paid internships in the aerospace industry for Black and African-American college students.

Seattle-area companies participating in the Patti Grace Smith Fellowship Program include Blue Origin, Boeing and Stratolaunch. The program is named after Patti Grace Smith, who was a pioneer in the civil rights movement, became the Federal Aviation Administration’s associate administrator for commercial spaceflight, and passed away in 2016 at the age of 68.

Check out the fellowship’s website for eligibility requirements and application procedures. The application deadline for internships in 2021 is Nov. 15.