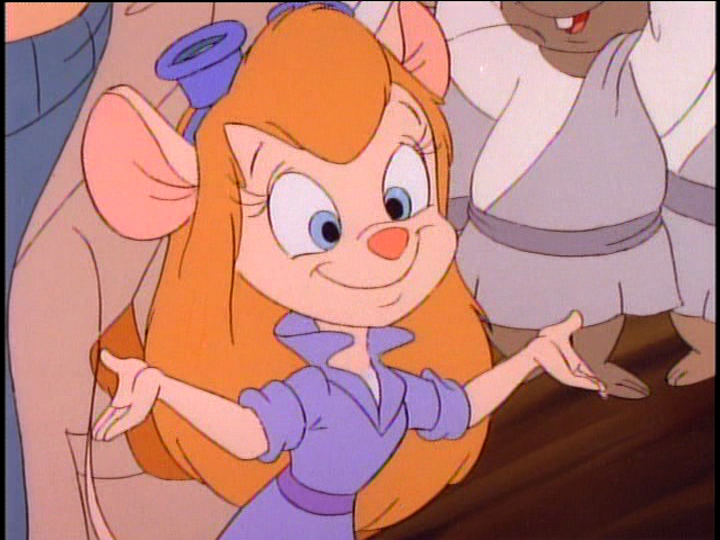 To help the others in cases

A tree in the city park

Her inventions, helping others, her friends

When her inventions don’t work, Chip and Dale’s arguments

Gadget’s personality was based upon the inventive character Jordan in the 1985 movie Real Genius. Gadget is a perfectly normal mouse; she loves solving problems like an obsessed and quirky inventor. Her curiosity and fearlessness drive her to find solutions that others have simply overlooked, and her mechanical savvy makes her incredibly valuable to the team. There are a few people she doesn’t like, but those few are typically villains. Gadget has a natural warmth about her that makes everyone welcome and pleased to see her. She’s very loyal to her friends and frequently goes out of the way to help them.

At the same time, Gadget is constantly thinking. As exhibited in the episode “Gadget Goes Hawaiian”, she has trouble focusing on just one way to do things. However once her focus has come, she can invent at a staggering pace—for instance, her armored gyro-mobile in “The Case of the Cola Cult”.

Gadget has her quirks. She thinks so much from an inventor’s standpoint that it tends to make her naive at times. She has upset Chip and Dale’s romantic advances more than once, simply by not understanding what it was they were after.

When Gadget is excited about her inventions, she’s known to use scientific jargon freely and talk at an extremely rapid pace. This tends to leave anyone listening to her clueless as to what she actually meant, but it never seems to bother her.

Gadget can be easily angered at times as well. As seen in “Kiwi’s Big Adventure”, “The Case of the Cola Cult”, and “Dirty Rotten Diapers”, Gadget has a limit beyond which her cute veneer is lost and she becomes, well… aggressive. Woe to the villain or anyone else who manages this feat, because once Gadget is riled up, she’s a juggernaut—thankfully, such incidents are rare. Regardless, she remains a strong female character.

She has a pink nose and light blue eyes, while the color of her hair has frequently been a topic of discussion as it changes from episode to episode. In many episodes, her hair appears to be orange in color and in others, it shows up as being a strawberry-blonde. At one point, Tad Stones, the producer of the show, was contacted by a fan and gave this explanation:

“I believe the intention was sandy-blonde. Because we work with a limited color palette, we pick the closest color to what we want. There was no intention of adding red. I did the first paintings of Gadget and she was completely blonde wearing blue coveralls.”

She usually wears a pair of lavender mechanic coveralls, a purple belt, and a pair of purple goggles which she keeps on her forehead, when she doesn’t need them. A white shirt can often be seen under her coveralls, but it is even more inconsistent than her hair, sometimes disappearing and reappearing within one scene. Though she can occasionally be seen in different outfits matching the situation, she never wears a dress or make-up unless it is part of a disguise.

Gadget was the daughter of Geegaw Hackwrench, a famous mouse inventor. It was implied at the time that her father had passed away. She first meets Chip and Dale courtesy of Monterey Jack, a friend of her late father, as the group is in search of an airplane. Gadget helps the group solve the crime they are investigating by lending her inventive talents. Afterward, having nowhere else to go and no other obligations, she then became an official member of the Rescue Rangers, making their base in a tree in the City Park and they promised to be her guardians and take care of her.

From that point, Gadget usually assists the team via her numerous inventions. In addition to building and maintaining the Ranger Plane, Gadget is the one responsible for the various technological items used by the team and is regularly inventing new vehicles and tools for the team’s use. She has the uncanny ability to take discarded and unrelated items, and invent nearly anything with them. Unfortunately, her creations don’t always work the way she intends and have sometimes failed at just the wrong moment to cause the team trouble. Both Chip and Dale are very attracted to Gadget and can be found often vying for her attention.

Gadget and the other Rescue Rangers appear in the Season 3 episode “Double-O-Duck in You Only Crash Twice!”. Within the show’s universe, the Rescue Rangers were lab animals granted intelligence by a device created by F.O.W.L. scientist Black Heron, with Gadget’s transformation being shown in demonstration footage to Steelbeak, who subsequently asks whether she made the jumpsuit herself.

Gadget started making appearances at the Disney Parks in 1989 in the Disney Stars Parade and 1990 through the Mickey’s Toontown Fair at Walt Disney World and at The Disney Afternoon Avenue at Disneyland. In addition, she even got her own attraction at Mickey’s Toontown in 1993 – Gadget’s Go Coaster. The coaster is still around, but Gadget herself rarely appears in the parks today.