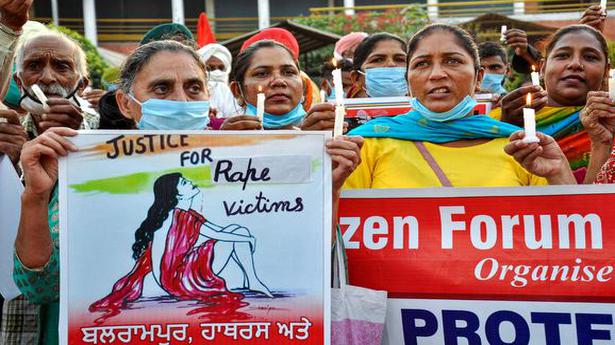 The Anti-Corruption Branch (ACB) of CBI’s Ghaziabad Unit mentioned “Rape, attempt to murder, gang rape and Murder (other)” as suspected offences in the case. Though the FIR and a press release were published on the agency’s website, the FIR was later removed. The link in the press release now leads to a bank fraud case.

Late in the afternoon, a fresh release was posted, stating that the agency had registered a case “against an accused and taken over the investigation of the case, earlier registered vide CC no-136/2020 at Police Station Chandpa, District-Hathras (Uttar Pradesh) on a complaint. The complainant had alleged that on 14.09.2020, the accused tried to strangulate his sister in the millet field. The case has been registered by CBI on the request of Uttar Pradesh Government and further from Government of India.”

The case was originally registered as an attempt to murder a Dalit at the Chandpa police station in Hathras on September 14. Neither the complaint (by the victim’s brother) nor the first FIR had made any mention of rape or gang rape.

After the 19-year-old victim succumbed to injuries in a Delhi hospital on September 29, triggering national outrage, political parties, activists and others called for an in-depth investigation into the ghastly crime.

The issue took a twist when the Department of Forensic Medicine of the Aligarh Muslim University’s Jawaharlal Nehru Medical College & Hospital said there were no signs suggestive of vaginal/anal intercourse. But the report said there was evidence of assault with injuries on the body which was cremated by the police on the night of September 29 allegedly without the consent of the aggrieved family.

A letter from the Editor

Your support for our journalism is invaluable. It’s a support for truth and fairness in journalism. It has helped us keep apace with events and happenings.

The Hindu has always stood for journalism that is in the public interest. At this difficult time, it becomes even more important that we have access to information that has a bearing on our health and well-being, our lives, and livelihoods. As a subscriber, you are not only a beneficiary of our work but also its enabler.

We also reiterate here the promise that our team of reporters, copy editors, fact-checkers, designers, and photographers will deliver quality journalism that stays away from vested interest and political propaganda.