Home / Magary: Why it’s OK to only skim articles on the internet 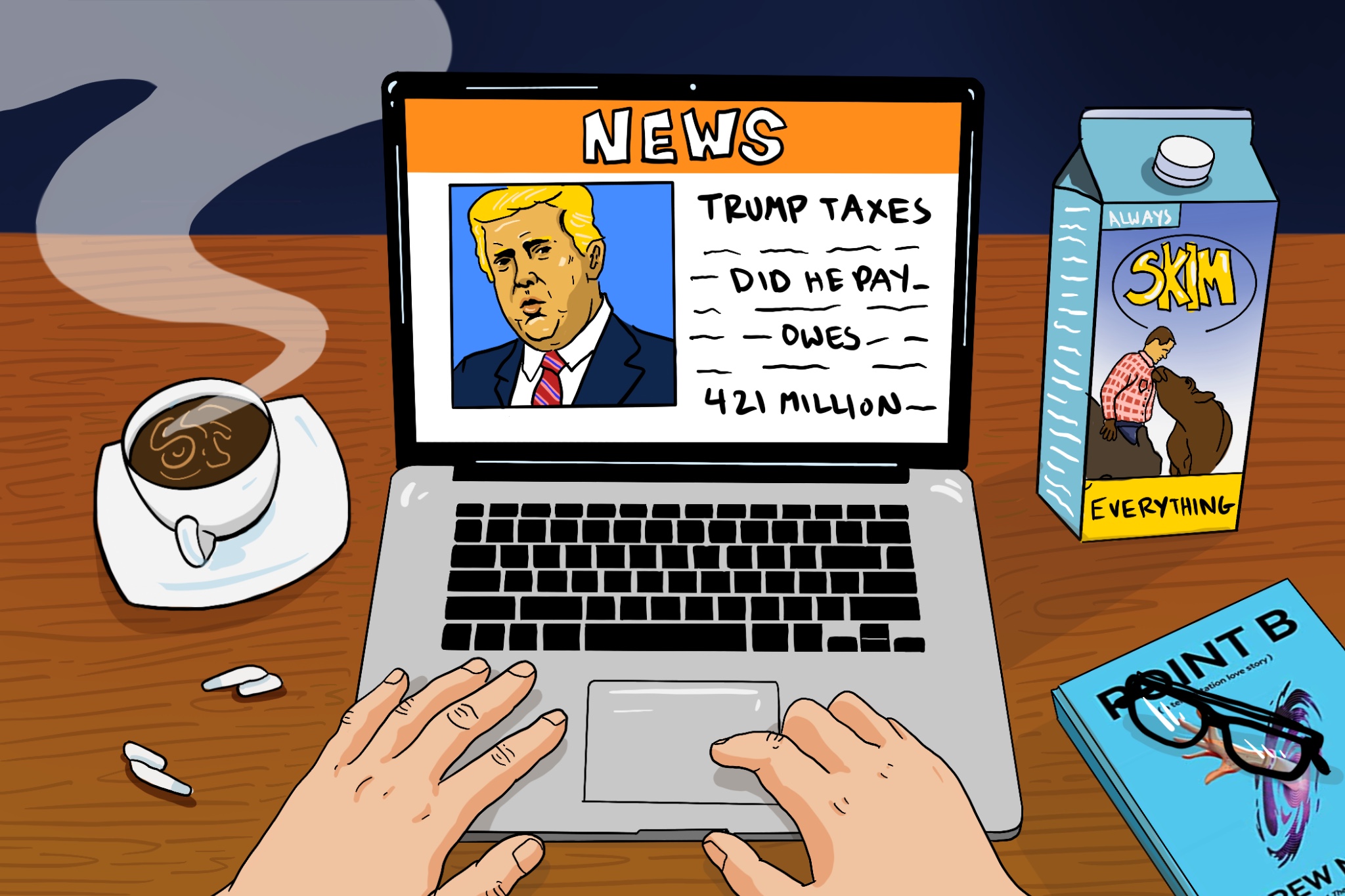 If you’re like me, you’re not gonna read all of this article. Many of you will see the headline and that’ll be all you require to formulate your opinion and then hop on Facebook to be like, “Can you believe this a—hole doesn’t read everything he reads?!” I would castigate you for such hasty judgment, but allow me now to confess something that deserves to make me an eternal pariah:

I barely ever read anything on the internet in full.

That’s right. I am a skimmer. You know how the New York Times dropped that big Trump tax return story over the weekend? Yeah no, I didn’t read all of that. Keep in mind, I’ve been horny for those returns for FIVE F—KING YEARS now, and yet their unveiling still wasn’t enough to get me to read through every last detail. No, what I did was peep the beginning of that article to get the $750 chestnut, and then I simply waited for a source I trusted to give me the TL;DR version. Luckily for me, the Times itself was more than happy to oblige and provide an aggregation of its own story for express perusing. I didn’t read all of that, either. I read the bullets at the TOP, and then started skimming the subsequent section breaks and immediately realized that those were decidedly optional. “His tax avoidance also sets him apart from past presidents”? No. S—t.

Longreads? Amigo, those are shortreads in my hands. I’ll start reading a deeply reported piece, and then another shiny link will catch my eye and I’ll leave that longread tab open but abandoned. Stillborn. Have I tweeted out lavish praise for lengthy articles I never bothered to finish? Of course I have. That’s how the longread economy stays afloat.

If there’s a way to avoid reading a piece in full, I’ll do it. This is why social media is useful when it’s not murdering the galaxy. I did NOT read any articles about this stupid scorpion gaming chair. Instead, I read the Twitter Moments compendium about it. If someone links to an article and then does a mini-thread about it, I will read the thread and not the article. You know how all of Trump’s advisers privately s—t on him for needing all of his information presented on a single sheet of paper or on a single PowerPoint slide? That’s me. Gimme the nut of what’s going on so that I can get right to what’s important: my reaction to the thing I’ve just barely consumed. Related: The scorpion chair is idiotic.

I read books in full. And I used to read entire articles in full at the gym. The elliptical machine was my reading chair. But I can’t go to the gym anymore, and so that productive phase of my web consumption got blown to s—t. I’ll still read articles written by my friends wire to wire, because I know them and I know that they won’t bore me. Otherwise, I take in all of my information in bite-sized nuggets, the way platforms like Twitter and outlets like Axios prefer I do. There’s a crisis of misinformation in America that has rendered the country obscenely f—ked, but partial information is not only just as prevalent, it’s likely more damaging. I know a lie when I see it. Pared-down truths are another matter.

RELATED: There’s only one way to do a Trump movie right

I would tell you that I plan on kicking this habit for good, especially given that I write and report for a living, and reading things in full is a necessary prerequisite for both of those tasks. But I’m not gonna do that. I’m GOOD at skimming, man. They even teach you to skim in school, and when has school ever lied to people? I have read lots of comprehensive works in the past and that has given me a trained eye for skimming. In that sense, skimming is an art. (NOTE: I put that part in bold so that you would notice only that and not the rest of the story).

For example, I told you I didn’t read all of that Times tax story. This is because I have read the Times enough to know that its report would lack concision and wouldn’t give me the clear truth of the matter in direct language. The president is obviously a criminal. The Times’ report probably said his transactions were “tinged with potential fraud” or some other cowardly phrasing. Rather than pore over that lifeless copy like I’m going through microfiche in the basement of a library, I can just go to someone else to give me the juicy bits, phrased the way I would prefer them phrased.

Trump wants to, needs to, remain President to try to avoid prosecution on tax fraud. No wonder he is refusing to commit to a peaceful transfer of power.

Oh yeah, that’s the way you put it. And Ana Navarro usually sucks. Good for her for doing a good tweet for once! Blind squirrels, etc.

If I’m lucky, someone will tweet out a screengrab of the best graf from a story, or one of my friends will do likewise in Slack, and that will be the extent of my consumption. I’m very choosy about who I get my truths from, and skimming is a way to help me glean the thrust of a story without having to eat my vegetables in the process. EVERYONE WINS. If I read a movie or album review, I skim right past the intro and hunt for the graf that tells me if the thing is good or not. If I read a recipe, I skip right past the storybook intro like everyone else does. If I’m hate-reading a bad column, I’ll Ctrl-F for “cancel culture” to get right to the worst part. I have s—t to do, man. I can’t go humoring the rest of you by reading all of your tedious bulls—t.

Is everyone as well-trained in skimming as I am? No. Are other people trusting suspect sources — Patriots fans, for instance — to aggregate material appropriately? Yes. Am I also doing that? Probably. Am I contributing to social media destroying entire journalistic enterprises that live off of pilfered content? OH GOD YES.

But can you blame me? There’s a LOT of s—t to read out there. I am somehow, against all odds, farther behind on my internet reading than I am on watching prestige television. That shouldn’t be possible, but here we are. There’s too much happening all at once now for me to take it all in. I would end up being a puddle of barf if I braved the attempt. And so I snack on the internet like a little kid with a gland issue, opening articles and taking a nibble before I’m hungry for something new. It’s hauntingly appropriate that when I’m finished, I never feel full.

Drew Magary is a columnist for SFGate and a co-founder of Defector. His third novel, “Point B,” came out in April.

MORE DREW: Ceiling fans are the only fans that matter

EVEN MORE DREW: Having your dog get sick in quarantine is its own little bit of torture