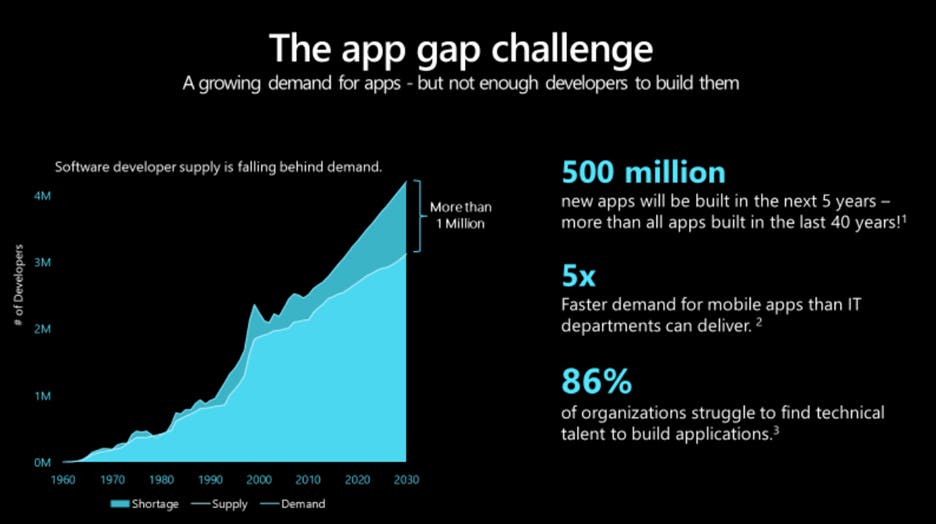 Earlier this week, I published my first coverage of the virtual Microsoft Ignite 2020 conference, in which I did a flyby over a wide range of product areas—Teams, Power Platform, Azure, and more. While I did touch on some of the Power Platform announcements, today, I will continue my coverage with a more in-depth look at Microsoft’s announcements for its low-code developer platform for businesses. This platform is a great differentiator for Microsoft and one of the best enterprise tools for enabling digital transformation. It’s quickly becoming one of my favorite of the company’s offerings to follow, and with all that Microsoft does well, that’s saying something. Let’s take a closer look.

Continuum for all developers


With the current digital transformation rate, accelerated even further by the pandemic, there’s just not enough developer talent out there to keep up with the demand. Many businesses, especially small-to-medium-sized companies, do not have developers on staff to help them digitally transform and stay competitive in today’s volatile market. The beautiful thing about Power Platform’s low-code strategy is that it extends the power of automation and app-building to the citizen developer or the business user who is not necessarily versed in code. That’s not to say Power Platform isn’t a valuable tool for experienced developers and large enterprises—just that it is accessible to the entire developer continuum, from amateur to expert, for businesses of any size. The times call for low-code developer tools, and Microsoft answered.

On that note, Microsoft announced a new solution it calls Microsoft Power Automate Desktop. The feature takes its Power Automate RPA (robotic process automate) offering and, with the help of recent acquisition Softomotive, extends it to the world of on-prem. According to Microsoft, this solution will give the full continuum of coders, both code experts and neophytes, the valuable ability to automate processes in desktop and web applications. Customers gain access to a drag-and-drop visual designer, with over 370 actions—ranging from humdrum everyday processes and workflows to incredibly complex. According to Microsoft, the visual designer, coupled with a live debugging tool, makes it a breeze to put automation steps in the right, logical order.

Additionally, the new offering includes a Desktop and Web Recorder. These tools can capture stills and track keyboard and mouse movement for developers to convert into automation paths for replication on web and Windows apps. Another significant benefit of this feature is that a diverse set of its key actions function across modern Windows apps and legacy systems without requiring any IT infrastructure modifications. According to Microsoft, one automation flow can support functions across SAP systems, websites and legacy terminals, including AS/400, Citrix and others. Meanwhile, error-handling, via safeguards like retries, notifications and alternate executions, helps cut down on bottlenecks. This addition of this UI-based automation essentially means Microsoft can now provide full automation to customers.

We also learned that developers will soon be enabled to create custom APIs, via Azure Functions and Azure API Management, giving them access to all Microsoft cloud-hosted data sources. Developers can publish connectors, backed by Azure API Management, to Power Platform, which Microsoft says accelerates the app development process significantly. For that matter, low-code developers can utilize this feature through Power Apps in Teams at no additional licensing cost. This feature builds on the recently announced Project Oakdale and will be in preview this month.

Microsoft also announced an integration of Power Apps with GitHub, the popular open-source developer platform. GitHub actions for Power Platform seeks to enable developers to custom-build software development lifecycle workflows, or SLDCs, within the source code of their flows, applications, virtual agents and other Power Platform assets. Preconfigured workflows are also available for the low-coders out there. This integration is similar to Microsoft’s recent integration of Azure DevOps with Power Platform and should make Power Platform even more flexible for developers. Again, like the others above, this is another feature that developers of all skill levels can leverage.

Lastly, Microsoft announced that its new Power BI app for Teams, announced recently, is officially in preview. This offering seeks to give Teams users a centralized, customizable home for data, so that insights are at users’ fingertips, for easy, quick access from the very same location where business decisions and conversations occur. Microsoft gave an example of one of its previewers, PayPal, who implemented a Power BI visualizations tab to Teams so that employees could punch up project progress reports with data-based visual aids. With every new integration (and they keep coming), Teams is genuinely becoming a one-stop-shop for business collaboration and digital transformation. It’s exciting to watch.

It’s honestly hard to think of another platform that does entirely what Power Platform does. If full enterprise digital transformation is something we hope to achieve in the coming years, automation must be democratized so that virtually anyone, of any skill level, can use it. From integration with Teams to bringing API management to Power Apps, Microsoft is doing a great job providing the tools that level the playing field. Excellent work, Microsoft.

Note: Moor Insights & Strategy writers and editors may have contributed to this article.