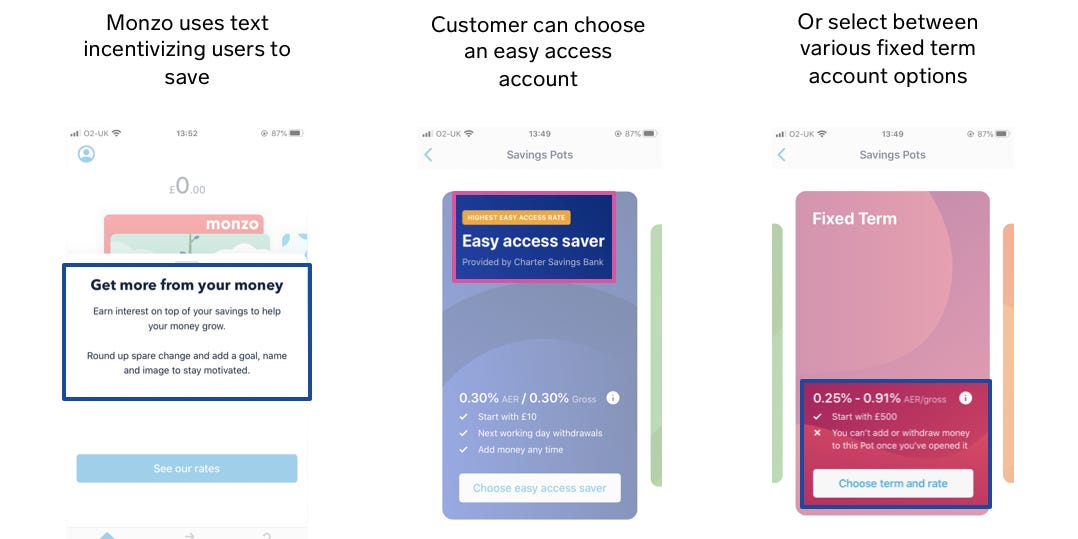 The UK is home to some of the world’s largest and most advanced digital-only challenger banks, led in user count by Starling Bank, Monese, Revolut, and Monzo.

In the past few years, these banks have grown to over a million users each, putting them in competition with the nation’s largest banks and building societies. One of the key factors behind neobanks’ rapid growth is their advanced mobile feature sets.

Armed with these insights, neobanks can identify ways to fuel further growth and customer acquisition, while incumbents can further develop their feature roadmaps and benchmark nonbank competition.

The full report will be available to Insider Intelligence Enterprise clients on October 13.

Monzo led in five of six categories and earned the highest overall score (62.3 out of 100) in our study.

Monzo topped the podium thanks to the in-demand features it offers in the three most important sections of the study: Security and Control, Digital Money Management, and Account Management. These features included rare offerings such as the abilities to change how the mobile app appears and to view credit scores in-app, the latter of which Monzo just launched in March.

The neobank’s victory in this study comes amid a period of extremes — exceptional growth and unprecedented challenges. Monzo currently counts over 4.6 million account holders (equivalent to 1 in 13 UK adults), a milestone it reached less than seven months after hitting 3 million users.

Further, this year Monzo relaunched its premium Monzo Plus account and expanded into business banking (through which it gained an impressive 50,000 clients in six months). But alongside its successes, Monzo has also faced major obstacles in 2020, including mounting losses, layoffs, and a 40% drop in the bank’s valuation.

Below is a sneak peek at some of the features that set apart Monzo’s mobile banking experience, a key factor behind its exceptional appeal to clients. It contains data from the study’s Account Management category, which is covered in greater detail in the full report. In this preview, we will examine some of the specifics of those tools and how they have been implemented by Monzo, to uncover insights into UX best practices.

The Account Management category contained many in-demand features in the study. In fact, it was the second-most heavily weighted in our report behind the Security and Control category: On average, 24% of respondents called each of the tools “extremely valuable,” versus an average of 21% for the study’s remaining features. Monzo outshone peers in the section, offering four of the category’s six features, including the two most sought-after.

Here are the features that Monzo offers in the Account Management category.

1. Monzo joins its neobank peers in allowing users to activate a new debit card in-app, a rare capability among legacy players. The feature is a critical facet of customer acquisition and engagement for neobanks, with a strong 35% of respondents calling it “extremely valuable.” And with all surveyed neobanks supporting it, these players enjoy a significant competitive advantage over incumbents: The tool was offered by only 50% of banks in our 2020 UK MBCE study.


2. It allows customers to open a savings account in-app. Demand for the tool was evident among respondents:  27% called the capability “extremely valuable,” but only Monzo and Revolut offer it. Notably, Monzo hosts a savings marketplace, giving its customers a range of options through a single app — a particularly salient benefit, given significant pandemic-related spikes in online investment and savings platforms’ account openings. Further, users don’t have to leave the Monzo app to open an account with the available third parties, which boosts app engagement.

3. Monzo lets customers set overdraft limits and preferences within the Monzo app. The tool underpins the neobank’s strategic focus on empowering customers to improve their financial health: For example, the ability to decrease an overdraft limit in-app can disincentivize impulse purchases. It is offered by Starling as well as Monzo, while Monese and Revolut do not offer overdrafts to customers.

4. Monzo enables users to customize their app’s display, creating a better user experience that can boost engagement. App interface personalization helps neobanks meet customers’ personal preferences. The capability is offered by both Monzo and Revolut; in the case of the former, users can customize the app icon as well as turn on or off new features through Monzo Labs.

To further set its offering apart, Monzo should consider offering two tools. The first feature is support of the ability to change a debit card PIN in-app, which 24% of respondents deemed “extremely valuable,” but no surveyed banks or neobanks offered, likely due to security concerns. However, 40% of top FIs in our 2019 US MBCE Report (Enterprise only) support it, highlighting that with the right security protocols, the tool can be offered safely. The second feature is allowing users to activate cash-back deals from retailers in-app, which none of the top neobanks support — although they do offer related capabilities — compared with 30% of UK banks surveyed.

The full report will be available exclusively to Insider Intelligence Enterprise clients. In addition to our UK Neobank Competitive Edge Study, Business Insider Intelligence publishes a wealth of research reports, charts, forecasts, and analysis of the banking industry. You can learn more about accessing all of this content here.

Business Insider Intelligence’s UK Neobank Competitive Edge Study ranks neobanks according to the strength of their mobile offerings and offers analysis on what neobanks need to do to win and retain customers, as well as how incumbents’ mobile offerings stack up against those of neobanks.

The study is based on a September benchmark of what features the four top UK neobanks — Revolut, Monzo, Monese, and Starling Bank — offer, and a May survey of 1,100 UK mobile banking users on the importance of 39 cutting-edge features in choosing a neobank. The survey was sourced by a third-party provider to a sample closely aligned with the UK population on the criteria of age (for those between 18 and 74), gender, and income.