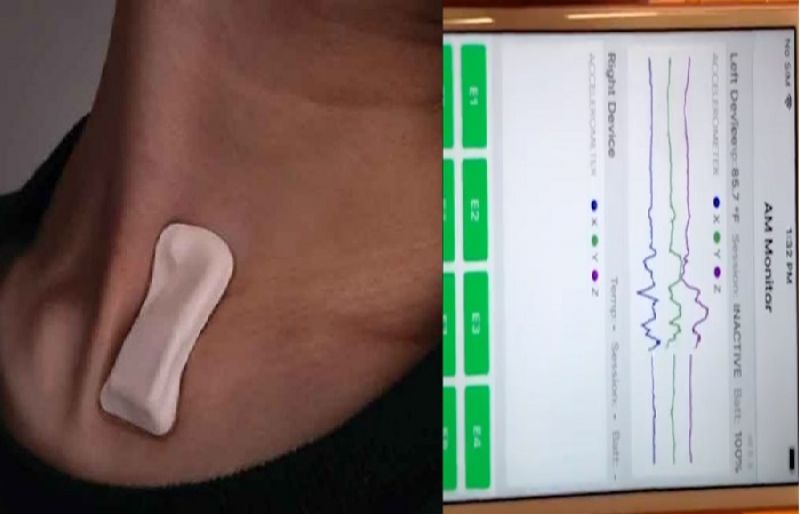 A NEW gadget may be able to detect early signs of coronavirus, scientists say.

The wireless device, which looks like a plaster, sticks to the base of the neck to monitor throat movement, breathing, heart rate and temperature.

Researchers in the US, who developed the flexible device, say its technology is similar to sensors designed to monitor speech and swallowing in recovering stroke patients.

The tech is also not unlike the chips you’d find inside FitBits and other fitness trackers.

It’s part of a growing effort to develop remote patient monitoring programmes that allow hospitals and health systems to check up on patients at home.

The scientists, from Northwestern University and Shirley Ryan AbilityLab, explain that users would wear the gadget for all hours of the day – only removing it once for daily charging.

While it charges, the patch’s stored data is synced with a smart device such as an iPad or laptop, which is when any coronavirus-related abnormalities are revealed.

John Rogers, director of Northwestern’s Center on Bio-Integrated Electronics, said that the gadget works by measuring heart rate and temperature.

It’s both reusable and unobtrusive – as it doesn’t use a microphone, he added.

He told CNet: “There are problems with microphones with ambient noise and tremendous invasions of privacy.

“We use a high-bandwidth, tri-axis accelerometer to measure movement of the surface of the skin.”

The idea is to create a monitoring platform that tracks patients throughout the day, rather than in isolated moments, Rogers added.

Care providers can use the data from devices like this to not only check in on a patient at a specific time – rather than waiting for the patient to come to the doctor’s office or the hospital – but also to monitor that patient’s health over time to spot trends and catch health concerns before they become more severe.

“I think that demands a hardware platform that is virtually imperceptible,” Rogers said.

“Health care, in general, will be improved when you move from episodic monitoring of status to continuous. I’ve always thought that makes sense.”