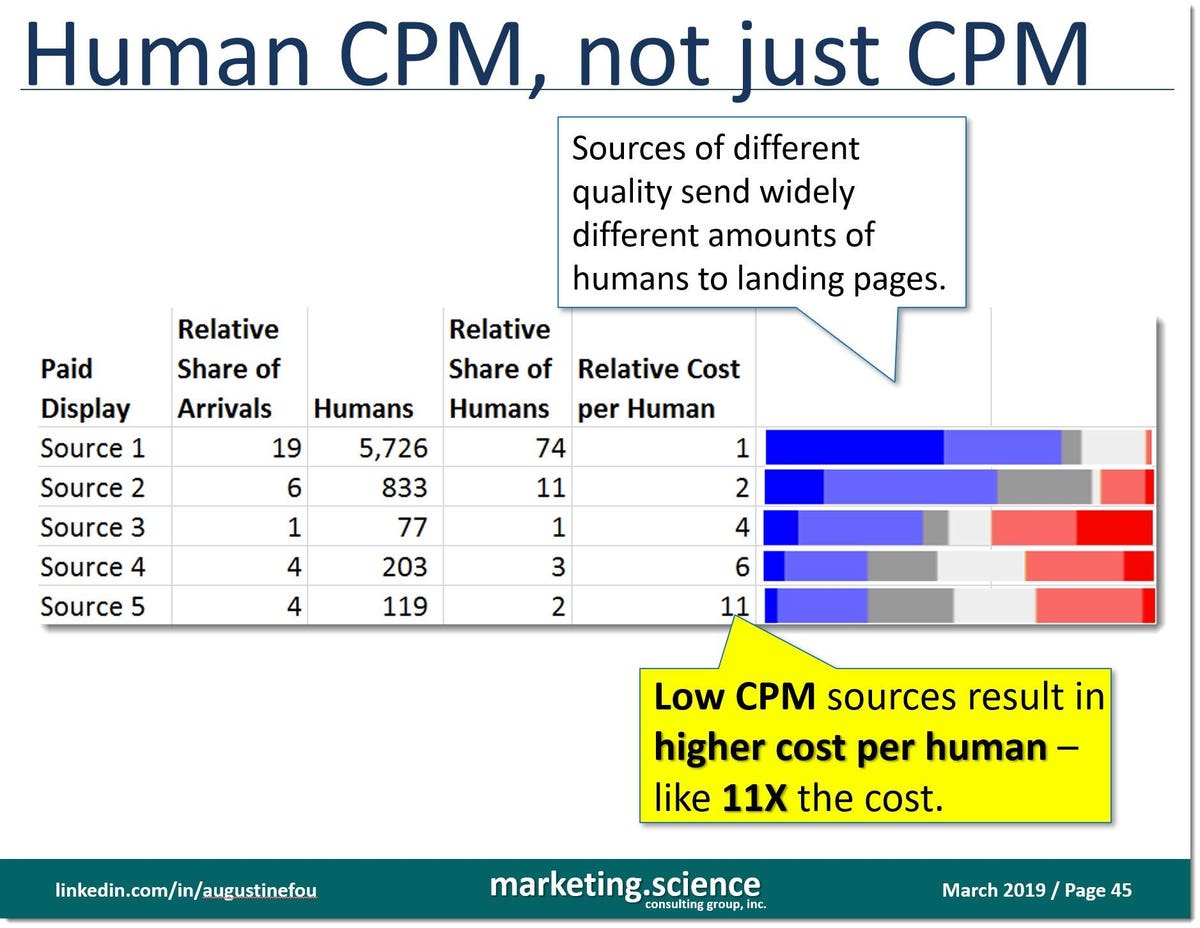 Marketers have been chasing lower CPM (cost per thousand) prices, particularly in programmatic channels, thinking that leads to greater “efficiency” in their digital ad spending. That is wrong and it’s just a race to the bottomless pit of ad fraud and adtech middlemen taking a greater and greater share of every dollar spent by the marketer.

Real, mainstream publishers with real reporters and editors create real content for real human audiences. They cannot afford to sell ad impressions at very low prices. But fake sites and app publishers can afford to sell ads at very low CPMs because they have no cost of content and low operating costs — think piracy sites, bot generated sites, etc. Those bot generated sites have no human audiences because they don’t need humans. They just use bot traffic to create billions of impressions to sell through programmatic exchanges to unsuspecting advertisers.

Marketers have even been led to believe that “fraud is priced in.” It’s OK that there’s some fraud because we’re paying lower prices already — for example, “we’re paying $3 CPMs now, when we were paying $30 CPMs before programmatic.” What marketers don’t realize is that they are buying 10X more impressions at $3; so they end up spending the same $30. But now, by buying $3 CPM ad inventory they are exposed to much higher fraud than before, even if their fraud detection tech can’t detect it.

Buying Digital Media is Not Like Shopping at Costco

In the following example, a marketer used five different display sources. Source 1 had the highest CPM prices, while Source 5 had the lowest CPMs. But note the difference in quality — Source 1 had the most dark blue (humans) and least dark red (bots), while Source 5 had the least humans. It goes without saying that if the ads are not shown to humans, the marketer cannot possibly get any business outcomes. Just by looking at the relative number and relative share of humans that did click on the ads to arrive on the marketer’s site, we can see that despite the low CPM costs of Source 5, it drove so few humans to the landing pages that the effective “cost per human” was 11X higher than Source 1. So despite the higher CPM prices, Source 1 was more “efficient” than the lower CPM Source 5.

This is probably quite hard to swallow, since marketers have spent so long trying to reduce the prices they pay for digital ads (at the encouragement of their media agencies). But doing digital marketing is not the same as shopping at Costco. Buying bulk toilet paper at lower unit cost at Costco makes sense; but buying low cost ad impressions from programmatic exchanges is just crap, literally.

Marketers should pay higher CPMs to real publishers that have real human audiences. What’s the catch? The “catch” is to buy lower quantities too. Even though you’re paying higher CPMs, you are getting your ads in front of humans AND you don’t need as many ad impressions since you’re not wasting the majority of them on bots and other trickery on long tail sites like pop-unders, forced redirects, auto-refreshing ad slots, ad stacking, pixel stuffing; the list goes on.

In the case study below, a large bank tried this crazy thing – paying higher CPMs to real publishers, to see if they would get better business outcomes. Crazy thing — they did! By comparing their large “legacy whitelist” which included hundreds of thousands of sites purchased through programmatic channels to a “new whitelist” of less than 100 mainstream publisher sites, they paid 40% higher CPMs. They studied the clicks that came to the site and the “starts” (consumers starting credit card applications on the site). Comparing the actual conversions to the clicks that arrived on the site, they saw a conversion lift of 70%.

So despite the higher CPMs paid, they got still higher lift in outcomes. That’s money well spent. What is not shown in the chart below is that the actual dollars they spent also went down, because they only needed to buy fewer impressions (at higher prices) to achieve those outcomes. How about that? Save money; pay higher CPMs; get more outcomes and greater efficiency in their digital ad spending.