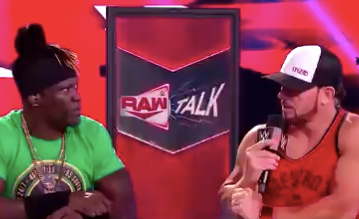 R-Truth and AJ Styles had a good back and forth

“I want to ask you something,” he began. “I know SmackDown was the house that AJ Styles built, but do you do condominiums, duplexes, two, three story houses?”

Styles targeted the host, Charly Caruso, saying: “Charly, you’re an enabler. That’s what you are. You know he’s talking nonsense and yet you continue to help him out with his nonsense.

“Condominiums, little homes – what? What are we doing here?”

Truth replied: “So you didn’t build the SmackDown house?!”

Styles said: “It’s the house that AJ Styles built but it doesn’t mean that I actually built it by hand. I’m saying it wouldn’t be what it is today without AJ Styles, that’s what I’m saying.

Truth: “Dawg, I was going to ask you for a card of something. That’s disappointing, man! That’s false advertising.”

Truth has enjoyed a long and successful career in WWE and has worked with guys like The Rock and Brock Lesnar at different points, and remains with the company for his ageless body and lovable personality.

Speaking to talkSPORT earlier this year, Truth explained how some of his famous 24/7 segments come to be.

“Once an idea comes up, once it’s said and we laugh at it, then we do it.