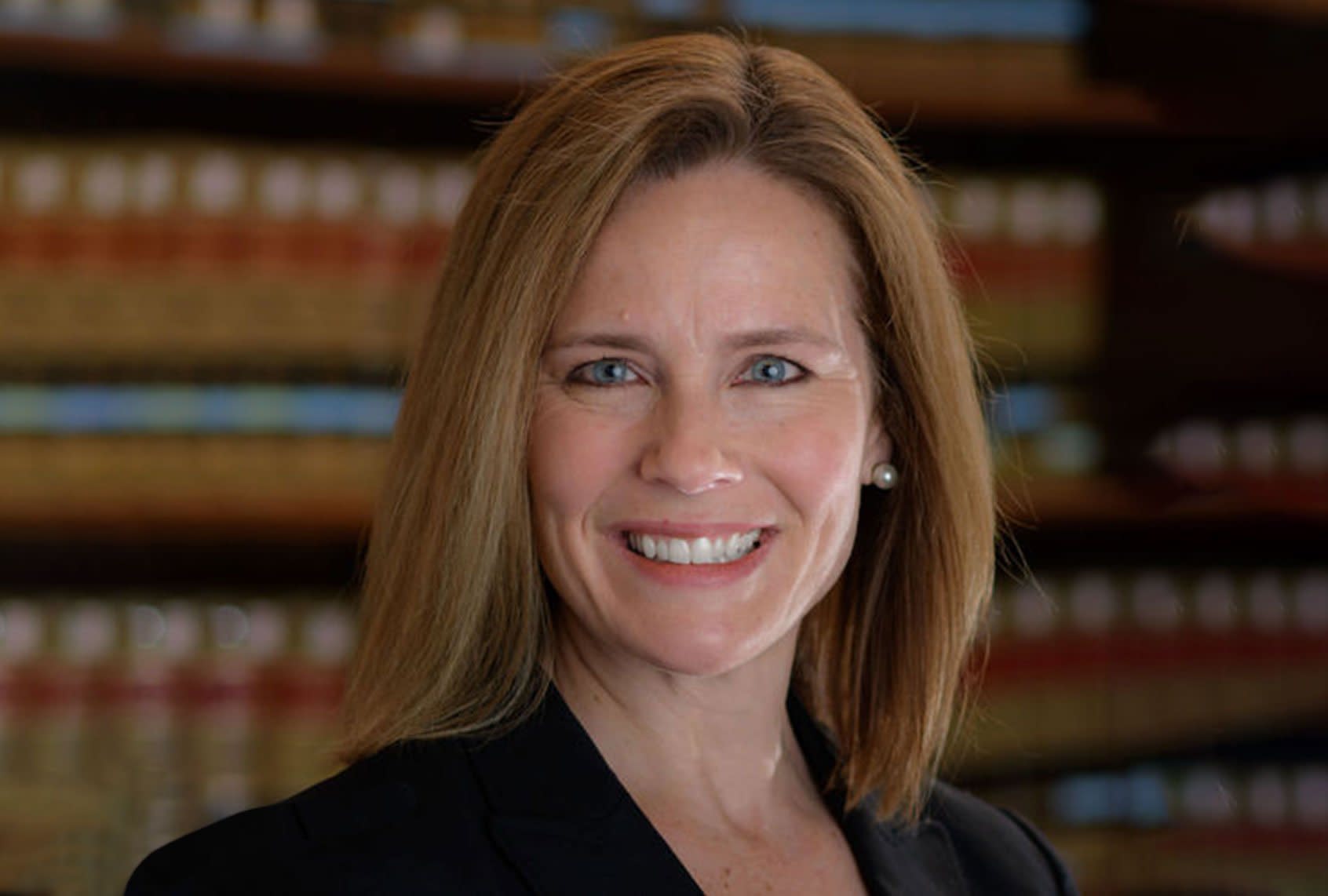 An obscure religious group tied to President Donald Trump’s Supreme Court nominee Amy Coney Barrett has scrubbed photos and mentions of her from its website ahead of her Senate confirmation hearings and interviews with lawmakers.

The New York Times reported last week that Barrett and her husband, who are the parents of seven children, are members of People of Praise, an obscure Christian sect which opposes abortion and teaches God has willed men to assume authority over their wives and family.

The Associated Press on Thursday reported that a search on the Internet Archive revealed that the group had removed content featuring Barrett and her family from its website in the summer of 2017, when she was on Trump’s short list for the seat later filled by Justice Brett Kavanaugh. The deletions included back issues of the group’s magazine, “Vine & Branches,” which had birth and adoption announcements for some of the Barrett family’s seven children, as well as several articles involving the federal judge or members of her family.

The group deleted more photos, articles and blog entries last week when Barrett again appeared as a likely nominee. A group spokesman confirmed to the AP that the organization had indeed deleted content.

“Recent changes to our website were made in consultation with members and non-members from around the country who raised concerns about their and their families’ privacy due to heightened media attention,” he said.

According to The Times, People of Praise describes itself as a “charismatic Christian community” whose members swear “a lifelong oath of loyalty, called a covenant, to one another, and are assigned and are accountable to a personal adviser, called a ‘head’ for men and a ‘handmaid’ for women.”

The “heads and handmaids give direction on important decisions, including whom to date or marry, where to live, whether to take a job or buy a home and how to raise children,” The Times added.

The AP reported that former women members of the group said wives were taught to obey their husbands at all times – and must provide sex on demand.

One woman said she was barred from access to birth control, because wives were expected to have as many as children as God allowed.

Senators are currently reviewing Barrett’s background and qualifications ahead of confirmation hearings for her potential lifetime appointment to the country’s highest arbiter of law. Outside groups, including religious organizations and women’s rights advocates, have launched lobbying efforts, and the confirmation, regardless of outcome, will loom large over Election Day.

The Daily Beast on Thursday reported that Barrett had signed a letter in 2006 urging the courts to overrule the “barbaric” Roe v. Wade.

“The Supreme Court’s 1973 Roe v. Wade decision legalized abortion for any reason,” read the letter, which was published as an ad on behalf of an anti-choice religious group. “It’s time to put an end to the barbaric legacy of Roe v. Wade and restore laws that protect the lives of unborn children.”

“So, we’ll start on Oct. 12, and more than half of the Supreme Court justices who have had hearings were done within 16 days or less,” he said on Fox News. “We’ll have a day of introduction. We’ll have two days of questioning: Tuesday and Wednesday. And on the 15th, we’ll begin to markup. We’ll hold it over for a week, and we’ll report her nomination out of the committee on Oct. 22.”

“Then it will be up to (Senate Majority Leader Mitch) McConnell as to what to do with the nomination once it comes out of committee,” Graham said.

Barrett, who is meeting with lawmakers this week, did not mention People of Praise in either her 2017 or 2020 vetting questionnaires.

Craig Lent, one of the group’s leaders, told The Times that the group was neither “nefarious or controversial.”

“We don’t try to control people, and there’s never any guarantee that the leader is always right,” he said. “You have to discern and act in the Lord.”

“Our members are always free to follow their consciences, formed by reason and the teachings of their churches,” group spokesman Sean Connolly told the AP this week.

People of Praise has declined to say whether it counts Barrett, who currently serves as a federal appeals judge, as a member. After an AP reporter inquired Wednesday with the group’s spokesman about members of Jesse Barrett’s family, Barrett’s mother’s name was removed from the website as the primary contact for the chapter in South Bend, Ind., where the University of Notre Dame is located.

Founded in 1971, the broadly Christian group comprises about 1,800 adult members, and its 22 branches operate outside the purview of the Roman Catholic Church, the AP reported. The majority of its membership remains Catholic.

Most group members enter a binding covenant after three to six years or leave, according to the AP. Thus, it would be unusual if Barrett had been involved with the group for so many years without having done so.