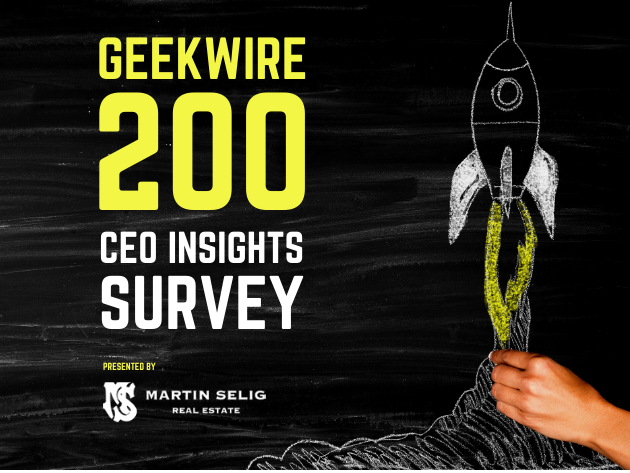 A majority of top startups in Seattle and the Pacific Northwest are seeing little or no impact on their businesses from the pandemic, or even a positive impact.

Most plan to hire more employees this year. And many are optimistic about the regional economy over the next 18 months.

Those are some of the takeaways from the first-ever GeekWire 200 CEO Insights survey. We polled the leaders of companies ranked on the GeekWire 200, our list of the top privately-held tech startups in the Pacific Northwest, and received nearly 50 responses. Topics included everything from the timing of bringing employees back to the physical office to whether a Trump or Biden administration would have a more positive impact on the U.S. tech and business climate. 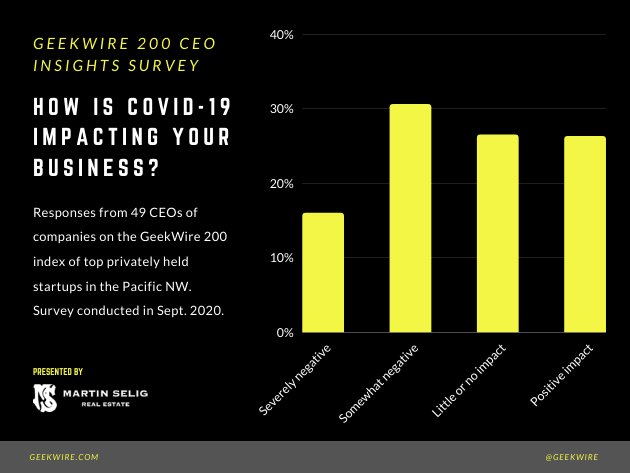 The results, collected anonymously, provide a unique snapshot of the regional startup ecosystem and broader tech industry. Here are some of the highlights.

This survey is an independent editorial project conducted by GeekWire’s news team, with underwriting support from Martin Selig Real Estate.

After reviewing the results from the survey, we followed up with some of the GeekWire 200 CEOs to learn more about how they are navigating through an unprecedented year. A key pattern emerged: tech startups braced for the worst as the pandemic began earlier this year, implementing pay cuts and slashing unnecessary expenses. But many have emerged as even stronger businesses and some are even setting sales records.

Allie Magyar, CEO at Vancouver, Wash.-based event management software startup Hubb, quickly pivoted her company after the events industry froze as COVID-19 put a hold on physical gatherings. Hubb, ranked No. 159 on the GeekWire 200, is now helping clients put on virtual events and will grow 5X from last year.

But then, as people started spending more time at home, many turned to Glowforge as they looked for ways to stay busy. Glowforge users also came together to help print ear savers for medical masks. Now the business is “better than it has ever been” and is nearing profitability for the first time, said CEO Dan Shapiro.

“When you’re stuck at home, there’s nothing like having a Star Trek replicator that lets you create the things that you dream of,” he said.

The pandemic has placed an increased importance on technology, which is boosting many enterprise software businesses such as Portland, Ore.-based cloud infrastructure startup Puppet, ranked No. 12 on the GeekWire 200.

“Puppet’s technology runs some of the most critical businesses, governments and municipalities around the globe,” said CEO Yvonne Wassenaar. “This segment has been less impacted than others during the pandemic which in turn has supported ongoing strength in Puppet’s business.”

But tech leaders are still staying cautious about the future despite promising metrics in recent months. Fran Dunaway, CEO of Seattle-based women’s apparel maker TomboyX, said she’s pleased that “people are in the mood for comfortable underwear made by people with ethical values.”

“However, with unemployment benefits running out, businesses cutting jobs and the vast uncertainty for the future, both economically and politically, we are looking forward with cautious optimism,” said Dunaway, whose company is ranked No. 136.

“For some businesses, no amount of creativity could solve for the lack of customers visiting a physical store in the way they always have,” Lauer said. “So while I’m optimistic on a macro-scale, I am deeply worried about the impact that the pandemic has had on our small business community.”

The survey results also line up with data we’ve reported in recent months. The Seattle Startup Hiring Tracker, for example, shows that 84% of local tech companies are hiring, up from 67% in August.

Pacific Northwest tech companies are also raising cash at unprecedented levels. The number of deals and dollars invested in the first half of 2020 — $2.3 billion into 135 deals — significantly outpaced the number in 2019 and 2018, according to a GeekWire analysis. Startups such as Remitly and Auth0 have also raised large rounds this summer.

The Seattle tech industry is somewhat of an outlier in the city itself. Indeed reported a 35.3% year-over-year decrease in Seattle-area job postings as of Sept. 18, the third highest rate in the nation. Tech hiring across the nation has also slowed compared to other sectors of the US economy, CNBC reported.

Learn more about underwritten and sponsored content on GeekWire.