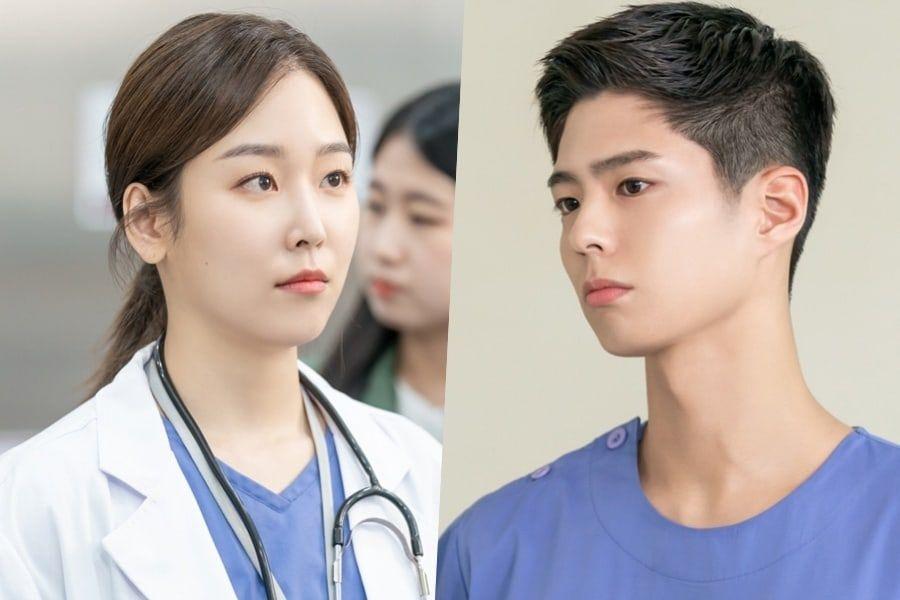 tvN’s “Record of Youth” released new stills of Seo Hyun Jin from her special appearance in the show!

The drama is about young people who struggle for their dreams and their love amidst the harsh realities of the modeling industry. Park Bo Gum stars as Sa Hye Joon, an aspiring actor and model, Park So Dam stars as Ahn Jung Ha, an aspiring makeup artist, and Byun Woo Seok stars as Won Hae Hyo, a model who wants to make a name for himself without relying on his family.

In the previous episode, Sa Hye Joon’s drama casting opportunity fell apart due to a scheme by his past agency’s CEO Lee Tae Su (Lee Chang Hoon). Although he didn’t show his disappointment to his manager Lee Min Jae (Shin Dong Mi), Sa Hye Joon was shocked nonetheless and had a difficult time.

The new stills reveal that Sa Hye Joon has been cast in a different drama. In the photos, Sa Hye Joon is wearing a medical gown on a film set. Despite being a rookie actor, he showcases everything he has in front of his co-star and top actress Lee Hyun Soo (Seo Hyun Jin). Lee Hyun Soo also watches Sa Hye Joon with interest, and Sa Hye Joon has bright eyes after talking with her, appearing to have come to some realization from her advice.

The upcoming episode will depict Sa Hye Joon getting a step closer to becoming a super star. In a recent preview, Lee Min Jae had delivered Sa Hye Joon news that there was a role available for an actor with modeling experience, so viewers are curious to find out what interesting events will await Sa Hye Joon with this new project.

Another preview shows Sa Hye Joon filming for a medical drama with Lee Hyun Soo. However, Sa Hye Joon trips over his lines, causing him to promptly apologize to the staff. Lee Hyun Soo reassures him, “It’s okay, medical terminology is really difficult. I thought my head would explode while memorizing it.” Sa Hye Joon comments, “But you’re perfect at it,” and Lee Min Jae explains, “I try to do a really good job in the scenes with my juniors. It’d be embarrassing otherwise. That’s how you’ll grow too.”

The production team shared, “Sa Hye Joon will begin a new challenge. Please look forward to whether he’ll be able to bloom successfully with the opportunities he’s been given. In particular, please anticipate the performance by Seo Hyun Jin, who will be making a special appearance. She’ll appear as a senior actress who will become a stimulant for Sa Hye Joon and add changes and fun to the drama.”

In the meantime, watch Seo Hyun Jin in “Black Dog” below: