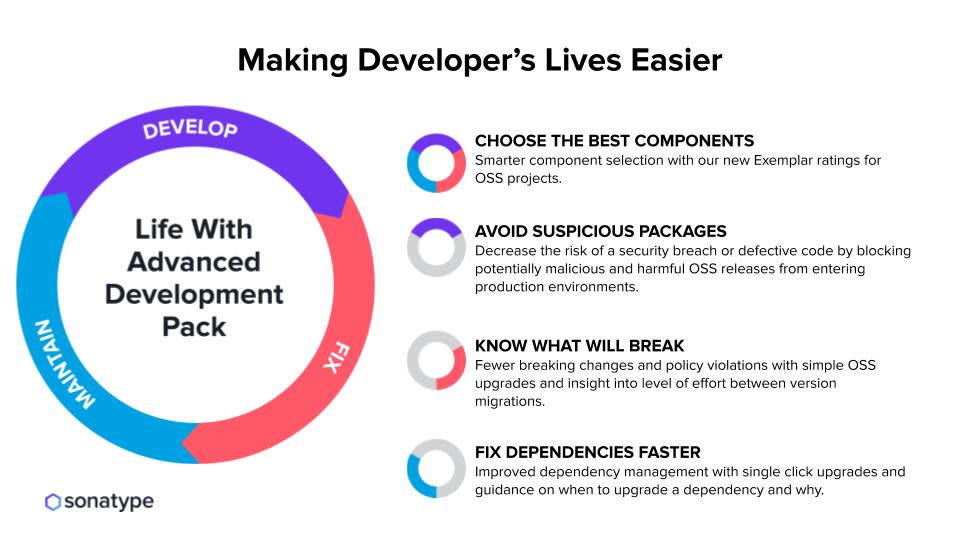 With more than 67% of developers regularly impacted when dependency upgrades break the functionality of their application, Sonatype’s Advanced Development Pack removes the guesswork, and tells developers exactly which dependencies provide the least costly upgrade path in terms of effort. Enhanced capabilities include:

“Developer ownership of the security and reliability of their code is increasingly important. With the Advanced Development Pack, we’re bringing the most comprehensive set of data on OSS projects to their fingertips.” said Brian Fox, CTO of Sonatype. “As a developer myself, my aim has always been to deliver the highest quality code to customers in the shortest period of time.  But when breaking changes, compliance issues, version control, and cybersecurity vulnerabilities pop-up, delivery timelines are challenged.  By reducing these speed bumps to delivery, we’re going to make a lot of developers happier and enable them to spend more time innovating and less time fixing their code.”

Sonatype is the leader in software supply chain automation technology with more than 350 employees, over 1,200 enterprise customers, and is trusted by more than 10 million software developers.  Sonatype’s Nexus platform enables DevOps teams and developers to automatically integrate security at every stage of the modern development pipeline by combining in-depth component intelligence with real-time remediation guidance. For more information, please visit Sonatype.com, or connect with us on Facebook, Twitter, or LinkedIn.