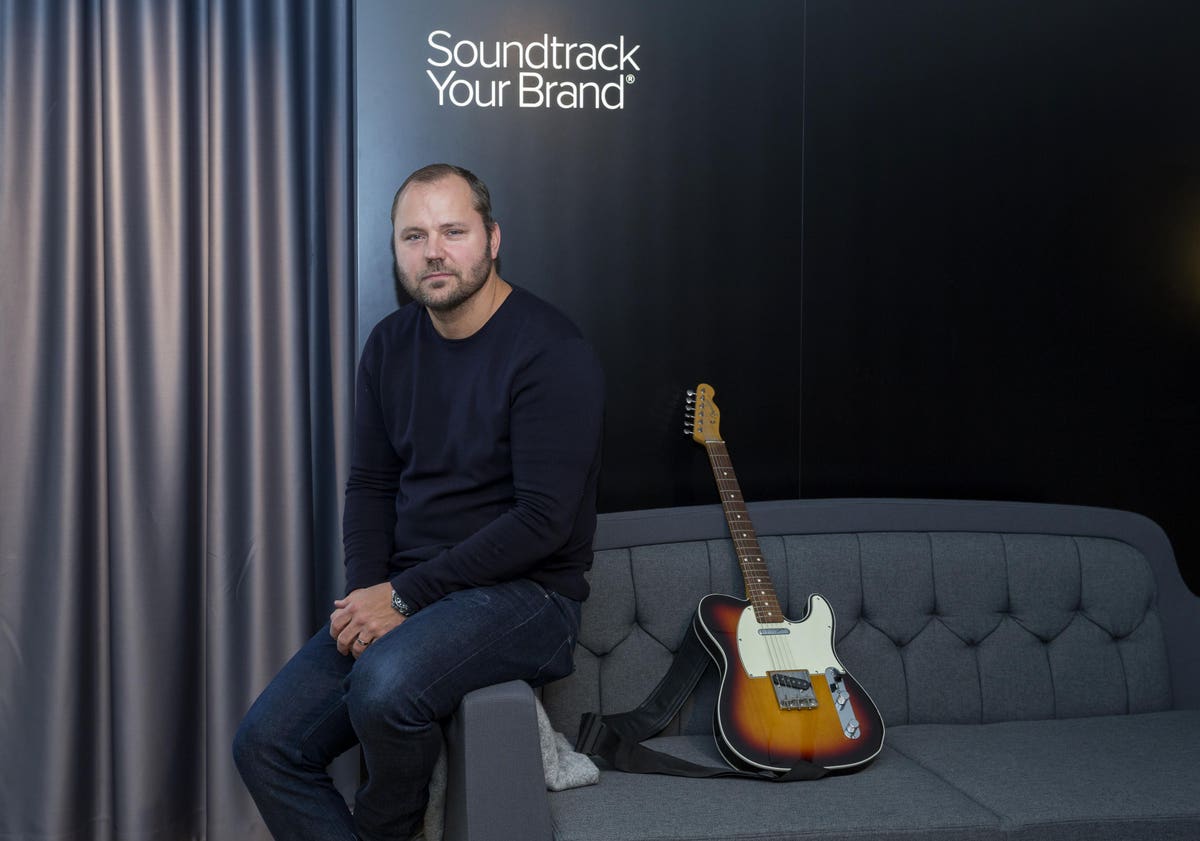 Ola Sars, co-founder and chief executive officer of Soundtrack Your Brand Sweden AB, poses for a … [+] photograph inside the company offices in Stockholm, Sweden, on Wednesday, March 23, 2016. Music streaming has become more important to an industry that’s seen its revenues slump over the past two decades. Photographer: Johan Jeppsson/Bloomberg *** Local Caption *** Ola Sars

Perhaps the most notable thing about the new B2B streaming product is that it enables a higher royalty output for rerecord labels and other music rights holders including artists who have long complained about meager royalty payments from streaming services including Spotify.

“Spotify offered a solution to piracy, and now I want to offer something better in terms of royalties for artists,” says Soundtrack Your Brand CEO Ola Sars, who founded the brand in 2013 as a joint effort with Spotify. “We give back more than 50% of all the revenue we generate to the creative industry, and we are proud of that. That should be the case for all B2B music providers, and we should also report and remunerate based on actual usage, which is only possible in our direct licensing set-up.”

Since Spotify accounts are legally limited to private, non-commercial use, Soundtrack Your Brand offers commercial and public businesses a solution for accessing features previously only available to consumer accounts. Users enjoy access to the world’s largest music catalog for business, with 51 million tracks fully licensed for business use. In addition to jump, skip and replay options, users can now create and customize playlists from scratch and import them from Spotify.

Currently operating in 74 markets worldwide, the new on-demand service costs $40-50 per month in markets worldwide. Labels receive $25 of the $50 per month, while the amount of royalty distributions that labels pay to artists depend on respective commercial deals. By increasing the cost five to ten times more than consumers pay, Sars says that he is able to increase label royalties six to ten times per subscription as compared to consumer streaming services. Based on full song trackability, the model gives Warner artists usage-based compensation and clear accountability when their music is played in a commercial environment.

Nielsen research commissioned by Soundtrack Your Brand in 2019 estimated that rights holders were losing about $2.65 billion worldwide due to businesses not using properly licensed services. Sars saw a significant opportunity to grow the market, which he says includes 70 million commercial subscribers worldwide. Since Warner Music first licensed Soundtrack Your Brand two years ago, Warner’s artists have been played billions of times in 60,000 venues collectively serving more than five billion customers worldwide.

John Rees, senior vice president of strategy and business development at Warner Music, says, “We’re delighted to be renewing our deal with Soundtrack and are pleased that it’s offering an even more flexible service for its customers. It’s great that our artists are fairly paid when their music is used by commercial premises to attract and retain customers, and drive spending. We hope the B2B streaming sector will expand strongly in the years to come.”


The Recording Industry Association of America (RIAA) reported in its mid-year 2020 revenue statistics report that streaming music revenues (including paid subscription services) in the U.S. grew 12% to $4.8 billion in the first half of 2020. Paid subscription revenues grew 14% to $3.8 billion and were the largest contributor of growth at 67% of total revenue for the same time period.

Looking at global music revenues, Goldman Sachs
research expects a 25% drop this year due to changes caused by the pandemic. However, by 2030 the company predicts that streaming could add 1.2 billion users and global music revenues could grow 84% from $77 billion in 2019 to $142 billion, thanks to growth in paid streaming and rising demand for music content and live events, licensing deals and new regulatory developments.

The new launch is also a reminder of how powerful music can be in creating ambiance and brand experience for restaurants, stores, hotels and other commercial spaces. As entrepreneurs struggle to stay in business during the pandemic, focusing on one small detail within their control can help make new ways of operating seem more “normal.”

“Music is an experience enhancer that can change the whole feeling in a physical space,” Sars says. “Brands know that, but they have been using old technology that does not allow them to efficiently control their ambiance in real time and enjoy that experience with music.”

One centralized control unit allows users with multiple business locations to create custom playlists and broadcast a different soundscape in each space. The system’s music calendar can be used to schedule songs in time slots while custom AI technology filters music tracks by genre, sound and business type. Subscribers can also filter profanity from music and add friendly ads in between tracks that remind patrons to practice social distancing.

“We are all trying to help each other so the music keeps playing,” says Sars, who is offering clients half off subscriptions during the pandemic along with the option to pause service during a city lockdown. “If the music stops, it’s a double whammy and feels like the end…it’s even more important now that we all keep the faith.”