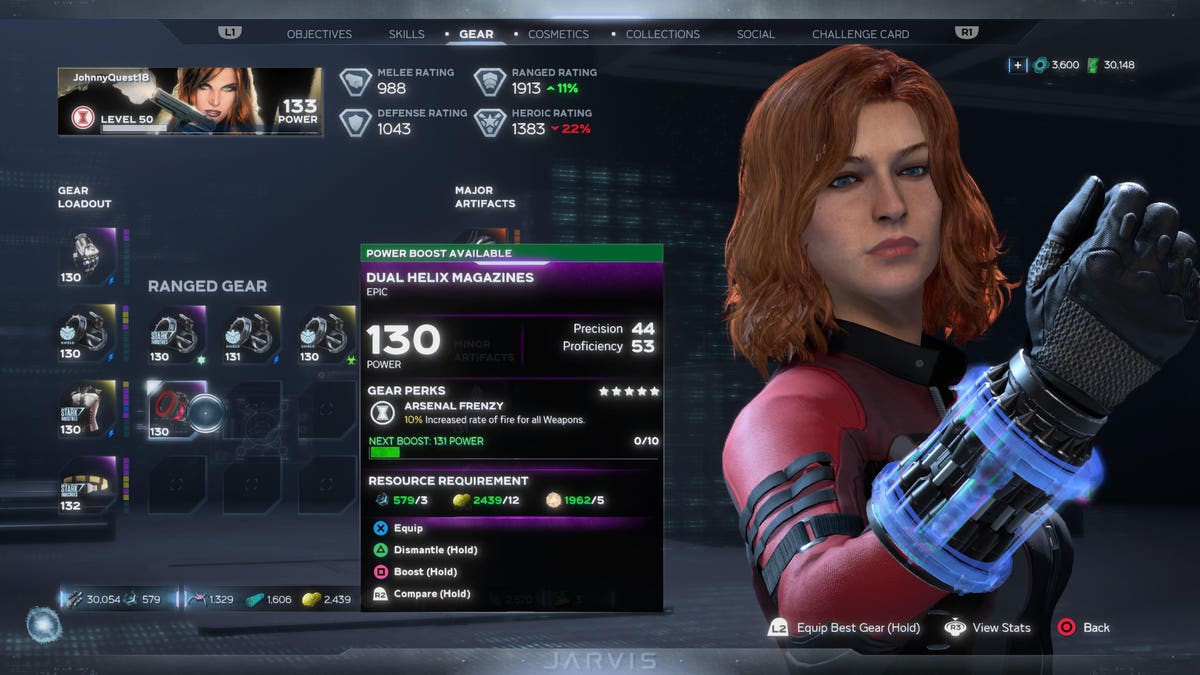 
I am deep down the Avengers rabbit hole now, having completed literally everything the game has to offer as I finally got through the Mega Hive this week. While I’m still playing and grinding, I have come to realize that a number of things don’t work about the endgame, and will need to be on the “priority fix” list that Crystal Dynamics is working their way through (admittedly very fast!).

Some of these are bugs, some of these are purposeful decisions that limit the potential of a satisfying endgame grind. And for the record yes, at about 120 hours into this game with six level 50 characters and half above 145, I still have not gotten even a single exotic yet.

This is a main problem. Right now the Mega Hive is your best shot at an exotic, and even though drops for it have reportedly been increased (I saw a few people getting two exotics from it this week in one run), it’s not a guarantee (100% perfection for my run, and only legendary drops). The other issue with the Mega Hive is that you complete it once and you’re done for the week. You only have a single chance at an exotic drop from that activity and only on one character.

That leaves the Last Avengers Standing Hive as what I believe is the only other major source of exotics, but at 14 floors a run, it’s exhausting, and the drop rate for it is extremely low (at 5-6 clears, I’ve still gotten none).

I do not know if exotics can drop in normal Elite Hives or Elite Vaults as I’ve never seen them. I saw one person on reddit one time post that they got an exotic from an Elite Villain Sector, but that seems to be like winning the lottery. All these sources need to produce exotics more regularly, and I maintain that exotics should have the chance to drop in the world at least on rare occasions.

Elite Villain Sectors are currently not working correctly. You can often finish them, even with a perfect score, and not even end up with a piece of named legendary gear, and there’s supposed to be an entire set for Villain Sectors alone, making them exhausting or impossible to farm.

Another weird choice here, where the first time you beat a special weekly mission you get a piece of specialty gear, but you only have one chance with one character once a week, and subsequent completions of the mission will not get you that gear. This is something that should be farmable on repeat, not something that goes away after a single completion when there’s an entire range of specialty gear locked behind it.

Just…the entire structure of the Mega Hive is dispiriting. It’s too damn long. Eight, six floor Hives for 48 floors total is absurd. It’s not even that it’s all that difficult, even with its “die once and that character is out” philosophy, it’s that it just takes so damn long and is so extremely competitive when you are already doing 6-14 floor Hives elsewhere. It should be shorter, and it should be repeatable, at the very least.

Already players are discovering that the best way by far to farm materials is to go into Challenge IV no matter your power and gain pretty much 100% more resources through chests and boxes than you would on normal difficulty, even if you’re not fighting or doing any of the actual mission objectives. And now that daily Villain Sectors work again and we can get DNA keys, the best way to get valuable Upgrade Modules is to go into a Challenge IV vault mission, skip the enemies and open the DNA chests for 15 modules per key, as any other use of them is waste. This is…a weird way to have people farm materials optimally, and this is to say nothing of the irritating Polychoron timegate for artifacts, which is only going to get worse and worse when more characters are introduced.

Crystal Dynamics has done this strange update where they nerfed named Epic and Legendary gear in favor of Exotic gear. For named items, Epics now have one character specific perk (and no others), Legendaries have two (and missing a third) and Exotics have all three. For many of these, that means only the Exotics are ever worth using (if you can find them), and you are better off with generic, randomly rolled Legendaries instead of the named ones because they cannot roll with generic but useful perks like the random drops can. It’s created a weirdly tiered system that is difficult to parse.

Black Widow is one of my favorite characters and yet I have to give up playing her until a bug is fixed where in most missions where you’re supposed to get a named legendary reward at the end, you instead get a set of epic gear. I’ve gotten a few named ones on occasion, but for the most part, this bug has wasted probably 80% of my runs with her, and I’m afraid to even attempt longer things like Last Avenger Standing and the Mega Hive with her, lest this bug also occur there resulting in lackluster rewards and wasting even more of my time.

Those are the fixes I want to see for now. I know CD can work fast, so hopefully we’ll see some results here soon.