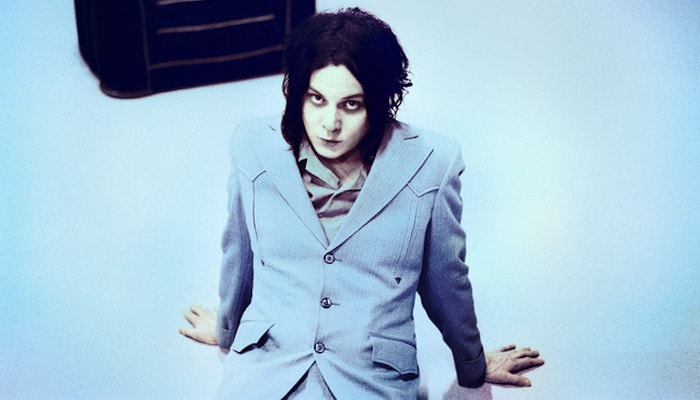 “I vote Pete Davidson calls up @machinegunkelly and he gets to be musical guest on SNL this weekend- just saying it’s what we deserve.”

To the surprise of many, MGK confessed that he was almost the musical guest for this weekend’s show.

“it almost happened this weekend.”

Although Machine Gun Kelly is not this weekend’s musical guest, it’s possible he could appear in a future SNL episode. Maybe he will finally make his SNL debut with some tunes from Tickets To My Downfall?

SNL‘s Lorne Michaels said White is a natural replacement because he is both reliable and a favorite musical guest on the NBC show.

“Calling somebody on a Thursday to be here for Friday, it’s complicated,” Michaels said. “It has to be people who are ready to go. And he’s always good on the show.”

It is unknown which songs White will perform this weekend. However, The White Stripes are preparing to release their first-ever greatest hits compilation this December. So, it’s possible he may play a few different tunes from throughout his career.

Earlier in the week, a video of SNL’s original musical guest Morgan Wallen surfaced on TikTok. The video, which eventually went viral, shows Wallen drinking at a party without wearing a mask.

In his statement video, Wallen says he has not tested positive for COVID-19, but adds that his “actions this past weekend were pretty shortsighted.” He goes on to say that he understands and respects SNL‘s decision to remove him as the musical guest.

“And they have obviously affected my long-term goals and my dreams,” he said. “I respect the show’s decision because I know ​that I put them in jeopardy and I take ownership for this. I’d like to apologize to SNL, to my fans, to my team for bringing me these opportunities and I let them down.”

Overall, Jack White fans and Saturday Night Live viewers are happy about the last-minute replacement. It appears that many people don’t know who Morgan Wallen even is, making White’s last-minute appearance a true win-win.

As well, others say White is perfect for the job since he most likely hasn’t left his house or socialized with anyone since the start of the pandemic.

Read more: Cassadee Pope is throwing it back with this iconic Hey Monday moment

When I found out Jack White was going to be the replacement for Morgan Wallen (who ever TF that is) on SNL. pic.twitter.com/inPqKVJik4

Who tf is Morgan Wallen?

Inject that Jack White goodness into my veins. https://t.co/BtTj7H1OKv

I love how SNL was like, just to be safe, who do we know who looks like they haven’t left the house in three years who can be our musical guest this week? And immediately called Jack White

Haven’t stayed up until 1am in a while since I’m 38 going on 88, but I’ll make an exception for Jack White. pic.twitter.com/XnXSN8qJRu

Whatever the opposite of “partying with college kids in Tuscaloosa” is, Jack White has probably been doing that

So SNL invited him to fill in for Morgan Wallen this weekendhttps://t.co/2LE82FRY6A

SNL made a smart replacement for the musical guest who partied maskless as Jack White has many antibodies after dying from typhoid in 1883 and earning his resurrection through a protracted Beelzebub guitar battle pic.twitter.com/Vq5k2E1rnF

Jack White is far more likely to make me stay up past 11 on a Saturday night than Morgan Wallen ever was.

@nbcsnl HUGE improvement! Jack White’s a legend, and I never even heard of the other guy. Plus country music would have made me change channels. It’s cheesy and pretentious. https://t.co/d8R0SEfGbZ

Excellent, excellent news! I admit I’d never heard of Morgan Wallen before all this, but now I know him as the irresponsible dumbass who gifted us a surprise Jack White performance, and I thank him for it. https://t.co/yBjyfBlK38

Do you think Jack White is a good replacement for this weekend’s Saturday Night Live? Let us know in the comments below.