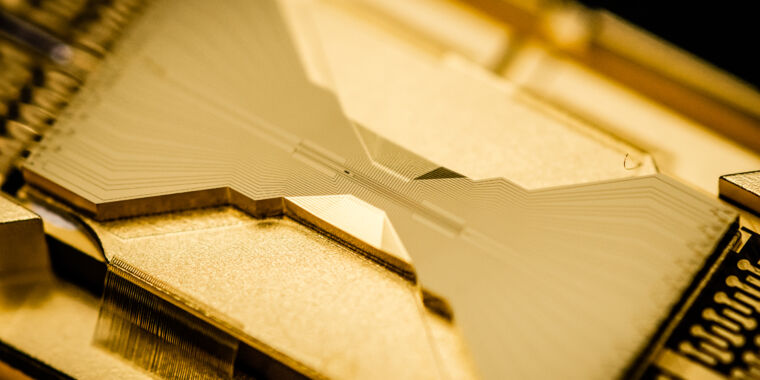 On Thursday, the startup IonQ announced that the next generation of its ion-trap quantum computer was ready for use. The new machine marks a major jump for the company, going from 11 qubits up to 32. While this still trails the offerings of companies that are using superconducting qubits, the high fidelity of the trapped ions makes them far less prone to errors and far easier to link into complex configurations. So, by at least one measure of performance, this is the most powerful quantum computer yet made.

Perhaps more significantly, IonQ’s CEO told Ars that it expects to be able to double the number of qubits every eight months for the next few years, meaning its hardware should consistently outperform classical computers within two years.

IonQ isn’t the only company that’s working with trapped ions; Honeywell introduced a quantum computer based on the technology earlier this year. You can read that earlier coverage for more details, but we’ll summarize the reasoning behind this technology here.

Superconducting qubits—used by companies like Google, IBM, and Rigetti—are made using standard fabrication technologies and so are expected to benefit from further progress driven by the semiconductor industry. But as manufactured devices, they are neither perfect nor perfectly identical. As a result, their developers have had to find ways to work around a relatively high error rate and some qubit-to-qubit variability. While these issues have been improved, they’re very unlikely to ever go away. (There are other potential issues, such as inter-device interference and wiring complications, but we’ll set those aside for now.)

The fundamental unit of a trapped-ion qubit, by contrast, is an atom, and all atoms of a given isotope are functionally equivalent and, quite obviously, don’t suffer from manufacturing flaws. And, thanks to their use in devices like atomic clocks, we’ve become adept at manufacturing the devices needed to hold ions in traps. This means the big sticking point is our ability to consistently manipulate individual atoms and ultimately read out their state.

The companies working with trapped ions are betting that the advantages of a consistent, flawless device will be significant, and the challenges of figuring out how to manipulate individual atoms with high fidelity can be overcome, giving the technology an advantage over its superconducting competitors.

Another key difference between the technology is that the connections among superconducting qubits are fixed based on the wiring that’s in place on the chip. By contrast, any two trapped ions can be made to interact with each other. As different quantum algorithms require different patterns of connections among qubits, this can allow trapped-ion hardware to solve problems more efficiently.

That said, there are differences in how companies are approaching trapped-ion hardware. Honeywell manages the interactions of its qubits by physically moving them between traps and creating entanglement when two ions share a single trap. IonQ, by contrast, keeps its ions separated and can arbitrarily link any two by sending them both a set of appropriately crafted photons.

IonQ’s previous generation of hardware had 11 usable qubits. That’s substantially fewer than the current offerings from places like IBM, which have over 50. The performance of the individual qubits—their resistance to errors during operations and readout—was better than the typical performance of a superconducting qubit, but not dramatically so.

With the new machine, everything has changed. To begin with, by using a larger trap, IonQ has nearly tripled the number of available qubits, reaching 32. And, just as significantly, the fidelity of the qubits has risen dramatically. “We went through and identified all the sources of error, which is its own kind of R&D,” Peter Chapman, IonQ’s CEO, told Ars. “And then you stack-rank them and say, ‘This is the next thing I need to go after.’ What we found in the previous system was that there was a source of noise that was the largest contributor to the problem of fidelity. And in this system, we managed to remove it.”

While qubit count is the most obvious measure of a quantum computer’s power, it is only a partial view of the potential of a given bit of hardware. A high number of connections among the qubits allows more complex problems to be solved. And the ability to operate the machine while minimizing errors is also essential to getting any useful work done. So IBM developed a measure, called quantum volume, which combines all these issues. For a machine with full connectivity among error-free qubits, the quantum volume would be directly related to its qubit count. Falling short on any of those measures would reduce it.

At the moment, the chip is available to beta users. “The hardware comes online, but you’re not getting the optimal fidelity on day one,” Chapman told Ars. “It takes some time to tune it—we do that during the beta period, and then they become available.” Once publicly available, it can be accessed through Microsoft and Amazon cloud compute services.

IonQ may be a startup, but it has a history that extends back before the company was formed. Some of the key founders (Jungsang Kim and Christopher Monroe) had been doing research on ion traps for years at Duke and the University of Maryland before launching the company. Since its founding, which included licensing a lot of the IP from those universities, the company has continued to pile up publications in the peer-reviewed literature.

So, this shouldn’t be viewed as a one-off advance from an unknown company. As noted above, IonQ already had working hardware, and it has nearly tripled the number of qubits in a single generation. Chapman said the progress is poised to continue. He said the company is confident that it can release a new generation every six to eight months, with each release including a qubit count that’s at least double its predecessor.

Chapman said IonQ’s hardware should only need a generation more to reach the point where it might be useful for some interesting calculations that could show a clear advantage over classical computers. But he also said that it’s important to recognize that there’s a big difference between that sort of interesting calculation and something that’s practically useful.

While it’s relatively easy to add more ions to a trap, and expand qubits that way, Chapman said that there are practical limits to how long you can make a chain of ions. So, the company has started looking into the research that has been done that used photons to entangle ions in separate traps. “You can hold only so many ions in a single chain before they get floppy,” he told Ars. “So then the question is whether you host multiple chains on one chip? That’s one way to get to it. But at some point, you need to move to multiple chips.”

IonQ is also working on trying to sink the size of its traps, having made prototypes that are about the size of a quarter. That should help with having multiple traps function as a single unit. So, there’s plenty of reason to think that the company can scale qubits for quite some time as long as none of these steps introduce significant fidelity issues. And fidelity might continue to be a major selling point, since IBM recently published a roadmap that, if it holds, could keep the company a step ahead of IonQ in terms of raw qubit count.

To improve fidelity further, the company is also looking at something that most people seem to agree will be necessary for useful quantum computations: error-correcting qubits. IonQ is releasing a draft paper from Christopher Monroe’s group that shows that the company’s hardware can be configured so that 13 qubits can operate as a single logical qubit that allows error detection and correction.

Normally, when wrapping up coverage of this sort of announcement, we’d try to critically analyze how this technology fits into the competitive landscape. But all we can really say is that it’s another indication of how exciting the field has become. There are multiple competing technologies as well as reasons to think that each of them has some significant advantages, and they’re all expected to be scaling to where there will be clear advantages for quantum computing within the next few years.