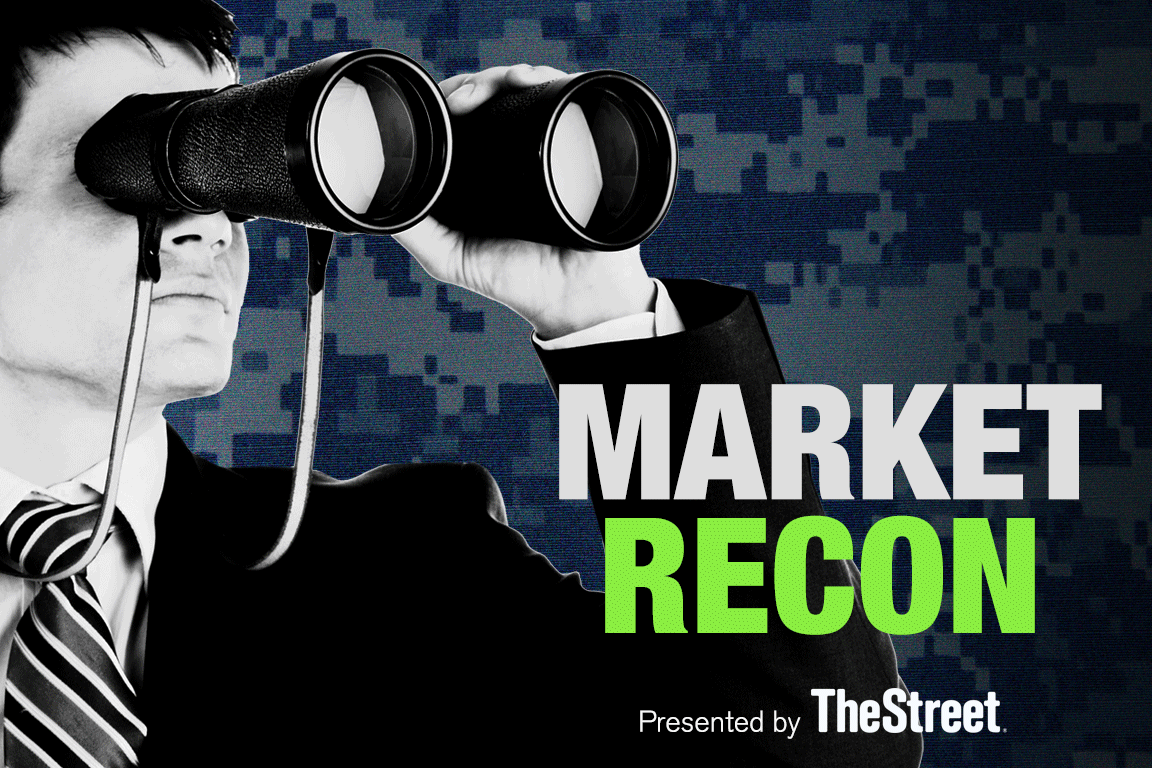 Political polls did show a lurch in the former vice president’s favor as the nation learned of President Trump’s diagnosis, and then the spreading of the virus to others within his circles. Perhaps these markets reacted on Monday to just how quickly and positively the president’s health appeared to improve in just a few days. The implications? Well, I know this is a stretch, but if the president is well enough to campaign, then perhaps a sweep by one party, a perceived market negative, could be avoided.

While the president’s rapidly improving health does at least remove one uncertainty from the political mosaic, the fact is that the algorithms that control price discovery hit the market with a new wave of buy orders later in the session, when sometimes we see at least a portion of the electronic traders (the day traders) go the other way, and take profits so that they can end the day semi-flat. There was something else at work here, maybe more than one factor, wedging its way into being the equation. So, why did I start out this piece thinking that we were so close, but not quite?

To be truly convinced that the negative trading environment that permeated September is behind us, I will need to see the kind of moves made on Monday by one of the broader, large-cap indices, only on increasing volume. This confines the robust aggression that we must see to either the S&P 500, or the Nasdaq Composite, preferably both. For this purpose, the Dow Jones Industrials are too narrow and does not make the cut as a major index.

All day long, I’d biddy biddy bum… If I were a wealthy man.

The thinking on my end goes in two directions.

One, markets are acting as if Speaker Pelosi and Secretary Mnuchin are making real progress. How long ago did I write that the two would ultimately meet at a round $2 trillion? If only they would ask when they need help. I’m kidding. That said, they are not kidding, and financial markets are pricing this in. Neither party is willing to play musical chairs with the economy with but one chair left in the room.

The other idea would be that the president’s apparently rapid improvement is removing one uncertainty. No, not because he is the president and will make everything better, but something much more profound than that.

What we know is that the president was diagnosed much more quickly than any normal person would be. The president was also treated more aggressively than any normal person would be. Implications there? If caught very early, and treated with the already in emergency use Remdesivir from Gilead Sciences (GILD) , and still in development therapeutics such as the antibody cocktail (there are four being studied) provided by Regeneron (REGN) , can this virus be more easily tamed?

What is key here is that while a now more likely fiscal compromise supports the economy, such policy also increases the monetary base as well as debt-load. Hence significant movement at the longer end of the yield curve on Monday and a weaker U.S. dollar.

Even more important than fiscal support moving forward would be the concept that the SARS-CoV-2 virus that causes Covid-19 is very soon to be effectively treatable for the public. This idea, more than even fiscal policy, unlocks economic growth, through a potential renewal of confidence in human interaction. After all, what is economics if it is not the quantification (not the qualification) of massed human response to conditions of surplus and/or scarcity?

What matters is not the root cause of these conditions that impact supply, either created through policy or through nature (even plague). What matters is how that massed public responds in terms of demand, creating growth (or not) in velocity. Velocity of money, the pace of transaction… how quickly still-shuttered slices of the economy can fully reopen.

This is really all you need to know in order to build an effective understanding of macroeconomics and then turn that into asset allocation.

For the president? The critical stage is still seven to 10 days after the appearance of symptoms. This is when we, or he finds out if he has been stricken with the post-viral inflammatory syndrome that can last seemingly forever. (Maybe it does last forever.) The hope would be that being the president, with the benefit of early and elite-level medical intervention, the potential for an outcome like that has been greatly reduced.

For the markets? Algorithms act much more quickly than do human traders, and they benefit from market overshoot. Where human traders might wait on seeing what color smoke rises from the chimney, electronic traders will race each other to the point of sale repetitively, trying to best each other for a penny or even a fraction of a penny over and over again. This price insensitive behavior skews what is supposed to be price discovery and places naturals (investors and funds representing investors) in the position of buying and selling assets at incorrect levels.

The risk here would be a breakdown in these fiscal talks. Surely this would cause an unraveling of these recent gains in market pricing. That would be, in my opinion, a short-to medium-term negative. In the case of a continuation of this administration with a split legislature, or the inauguration of a new administration with a split (or even united) legislature, both parties seem to have, with the exception of just a few members, embraced the idea of deep deficit spending. 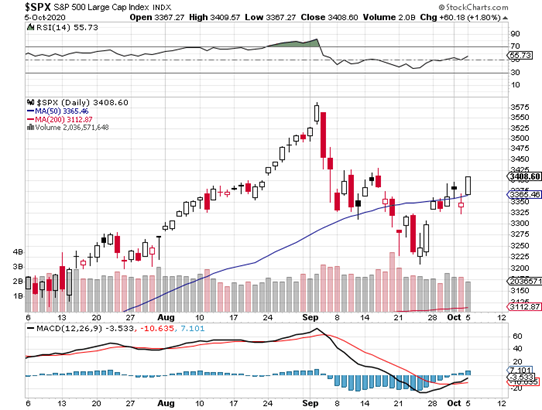 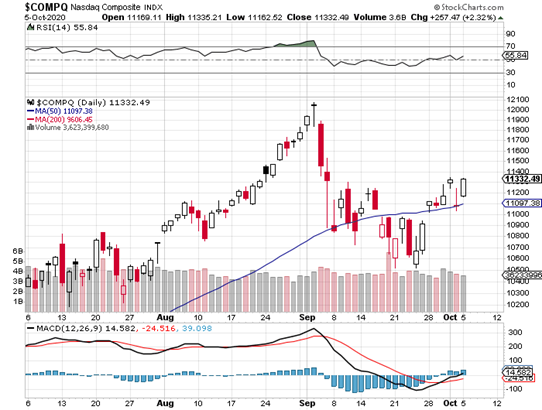 On Monday morning, I wrote to you and told you what would matter during the regular trading session would be what these two indices did at their 50-day simple moving averages given that both had gone into the weekend just below (pierced but not broken) that level. As readers will easily see, even on less-than-exciting volume, both of our major, broader, large-cap indices passed that test with flying colors. Both appear to show improving Relative Strength on the back of better looking daily MACDs (Moving Average Convergence Divergence) as well.

This is interesting, because when broken down, Monday’s action tells quite a tale.

The energy sector led the way. That’s certainly not election related, being more closely tied to a weaker dollar and/or a more rapid reopening of the economy. Technology performed well led by the semiconductors, and hardware. Again, far from election related as Biden tax policies would be a negative for tech stocks, especially those with a strong international presence. More likely hopium around a global economic rebound supported by the Nvidia (NVDA) events this week.

Beyond that, health care did well, led by biotechs. That was not just Regeneron (RGEN) , but the Bristol-Myers (BMY) /MyoKardia (MYOK) news. Materials finished fourth, That’s the dollar. Financials finished fifth. That’s the yield curve.

I actually starting to think that maybe I should go into earnings season with a long position in JPMorgan Chase (JPM) . I have had zero exposure to either big oil nor banking for quite some time now.

Investors and traders have a number of issues and concepts to consider right now. First, since we have already mentioned Regeneron, we must consider that should the president maintain the trajectory of his rapid recovery without complication, does that speed along an Emergency Use Authorization for the REGN-COV2 cocktail? Good for the stock and our nation if this works as well as I hope it does. Unfortunately, the company has already made it known that there is not yet sufficient inventory.

We have also already mentioned Nvidia today. Nvidia made several announcements that I thought might wait until later this week. On the first day of the firm’s week-long virtual GPU Technology Conference, CEO Jensen Huang outlined a vision for artificial intelligence requiring a rethinking of semiconductors, networks, and the way various tools including algorithms are either built or used.

Nvidia unveiled new BlueField DPU (data center) processing units, as well as DOCA, a programmable data-center infrastructure on a chip-type architecture. In addition, Nvidia made news in that it will build a new $52 million supercomputer in Cambridge, England that both GlaxoSmithKline (GSK) , and AstraZeneca (AZN) will make use of as those firms work toward developing their Covid-19 vaccines.

As Nvidia’s week unfolds, I expect to hear more on its plans to integrate Arm Ltd., while also expanding on the software partnership with VMWare (VMW) to create a platform supportive of later generation GPUs, as well as the adoption of Nvidia’s capabilities by Microsoft (MSFT) in regards to power both Azure and Office.

It’s easy to see this chart as proof. Proof of what? Proof that a fiscal support package is close. Anyone else notice the action in United Rentals (URI) on Monday (and even Friday)? Take a look at this breakout. 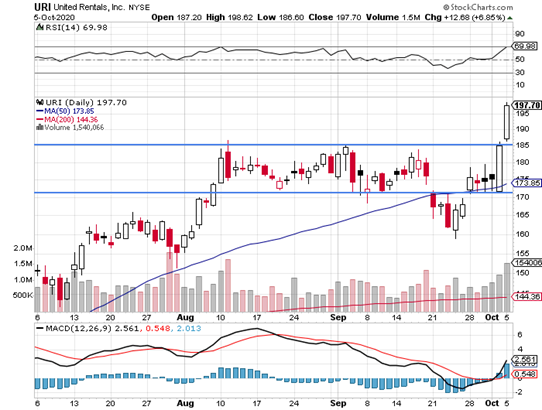 There’s a lot to see here. First, we have a basing pattern that runs from early August into late September. Then URI gaps lower. Then, the stock gaps higher, reclaiming the base support level. URI goes on to find support at that very same level for four consecutive days followed by the breakout. What gives?

The easy call would be that an infrastructure deal might be on the way. It’s deeper than that, though. On Monday, URI’s North American unit gave notice of its intention to redeem an outstanding $750 million principal amount of 4.625% senior notes due in 2025 on Oct. 15. As recently as late July, URI launched $1.1 billion in senior notes that would be due in 2031, which would be used to redeem $1.1 billion in 2026 senior notes. The company made use of its existing credit facility then, and is making use of that facility to take action on Oct. 15.

Yes, there may be a fiscal deal coming. This stock is up suddenly up because it is better managing its $11 billion total debt-load.

No, I do not buy URI on this breakout. Maybe if the breakout forms a handle that turns the second half of September into a cup.

The Fed (All Times Eastern)

Get an email alert each time I write an article for Real Money. Click the “+Follow” next to my byline to this article.