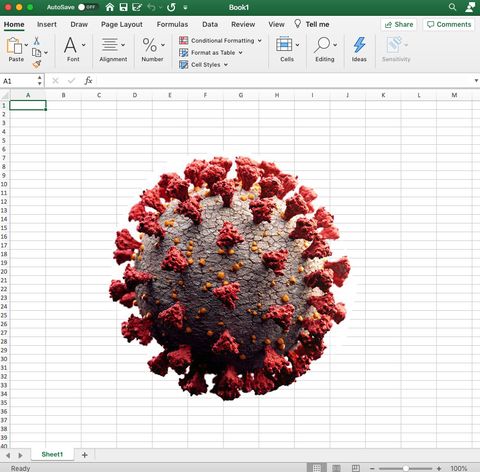 The culprit, according to Public Health England (PHE)—a government body of the U.K.’s Department of Health and Social Care, which collates data from public and private labs—wasn’t human, but rather … Microsoft Excel.

“A technical issue was identified overnight on Friday 2 October in the data load process that transfers COVID-19 positive lab results into reporting dashboards,” Michael Brodie, interim chief executive of PHE, said in a prepared statement on Sunday. “We fully understand the concern this may cause and further robust measures have been put in place as a result.”

Because Excel has a cutoff point of 1,048,576 rows and 16,384 columns per file, any excess records were not included in the official database. In this particular case, The Guardian reports, a lab sent in daily testing results in a CSV file—essentially a list of comma-separated values in a text file—and Excel cut off the 15,841 new records at the bottom, leading PHE to release incorrect figures for positive COVID-19 cases.

Since then, the data has been corrected, with 12,782 new cases reported on Saturday, and 22,961 on Sunday, leading to some speculation about a potential second lockdown.

The glitch is a significant failure for the U.K. government, as it has stymied progress in contact tracing, the process of alerting individuals that may have come into contact with those who have tested positive for COVID-19. Although PHE says it did notify people with a positive test result in a timely fashion, the agency didn’t alert those who had been in close contact with the infected patients. Without effective contact tracing, it’s harder to rein in the spread of the disease.

The Best Face Masks for Your Buck

Now, the government says it has put a “rapid mitigation” into place that splits large files up so this collation error doesn’t occur again, as well as a “full end-to-end review of all systems … to mitigate the risk” of a similar snafu.

Oddly enough, this isn’t the first time Excel has been in the hot seat with scientists. For years, geneticists have decried the software because it automatically updates certain symbols into dates.

Earlier this year, the HUGO Gene Nomenclature Committee (HGNC), the standards organization for naming genes, based in Hinxton, England, actually had to rename genes. So for example, SEPT1—a gene found in human chromosome 16, which encodes a protein that may contribute to the neurofibrillary tangles associated with Alzheimer’s—now becomes SEPTIN1. MARCH1, another protein encoding gene found in chromosome 4, is now MARCHF1.

That’s a quirky issue, but using Excel for tracking public health data in the midst of a pandemic is a whole different ballgame—one that shouldn’t be played at all, some data experts say.

Max Roser, a researcher at Oxford University and founder of the scientific publication Our World in Data, wrote in an October 5 tweet that he’s “glad that they are apparently now working on a solution. Not one, but several Excel spreadsheets…” We’re sensing some irony there.

Next time around, the U.K. government may want to list its cases in rows, rather than columns, since there’s a higher input limit. Or, the government can hire a technology company to build an enterprise platform specifically meant to collect massive volumes of test results from labs across the country. Entire firms specialize in just that—which is why your employer’s payroll information isn’t all sitting in a simple Excel sheet that could leak to the public.

After all, how secure is a spreadsheet full of sensitive health data, anyway? Do better, England.

This content is created and maintained by a third party, and imported onto this page to help users provide their email addresses. You may be able to find more information about this and similar content at piano.io