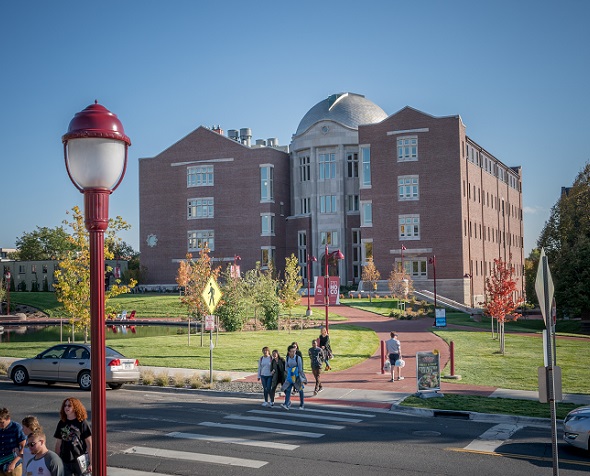 If women are underrepresented in computer science (and they are, by a large margin), you wouldn’t know it from sitting in on the Grace Hopper Celebration. Each fall, for the last 20 years, tens of thousands of women have converged for a long weekend of collaboration, networking, mentoring and commemoration of their contributions to the tech world.

COVID-19 pushed this fall’s convention into a virtual format, but it didn’t prevent the University of Denver’s Ritchie School of Engineering and Computer Science from sending 26 students (plus seven faculty and one staff member) for free. A private donor and funds from the school’s diversity, equity and inclusion budget covered the costs.

In interviews via email and Zoom, the DU Newsroom asked Anndi Russell, a graduate student in the data science program; Izzy Johnson, an undergraduate pursuing a BS in computer science; and Scott Leutenegger, a computer science professor and the Ritchie School’s director of inclusive excellence, about their experience

What’s it like for each of you as a woman in computer science?

Anndi Russell: My program is more equal in terms of women and men than is true in the larger computing world. But before this, I worked in education for a few years — which is a very female-heavy industry typically — so I know switching into computer science and the tech world is going to be a little different. I’m grateful for having a lot of female classmates right now and people I’ve connected with. We support each other.

Izzy Johnson: As an undergrad, I think I was surprised by how many women were in my classes, but it’s definitely still weighted the other way. At DU specifically, I’ve really enjoyed how many female professors I’ve had. I’ve had some really influential female professors in the Ritchie School.

Scott, why is attending a female-focused conference important to you?

Scott Leutenegger: Computer science has a serious problem with (a lack of) diversity based on gender and race/ethnicity. For example, the percentage of 2019 BS, MS and PhD graduates who identify as female were 21%, 27% and 20%, respectively. Computer science is one of the best pathways to upward mobility — and we are excluding women.

Thus, it is essential that our discipline addresses systemic sexism within our educational and professional communities. The Grace Hopper Conference is having a huge impact on empowering women in CS and is a big part of the solution.

How did you feel attending a conference that’s focused on women in the industry?

Russell: For me to see women who are at the top of the fields across the board in the tech sphere was very inspiring. We’re all familiar with the idea that you look at a panel and it’s all men. It can be frustrating. It was refreshing to say, “Wow, there are all women up here and it’s just nice. A woman has space to use her voice.” I really appreciated how much the conference emphasized women of color. Obviously lifting up women in general [is important], but [so is] recognizing that within that we have to especially lift up women of color.

Johnson: There were also things that were purely technical like, “This is what’s going on in the industry; this is interesting work being done in the field.” I appreciated that because sometimes I think [conferences can be] a little heavy on, “It sucks to be a woman in tech. Here’s how you can make it better.” It was fun to have those examples of things that are going really well for women in tech.

What made you interested in attending in the first place?

Russell: Because I come from a non-tech background, I’m looking for any opportunities that I can to not only connect with people in the industry but in a broader sense see what’s out there and how the world of tech functions. I’m also a passionate feminist, so to express that in the tech sphere around other people who feel the same way felt really important to me. I wanted to soak in and learn as much as I could from women who are doing the type of work I want to do.

Johnson: I’m getting a computer science degree, but I have no clue what I want to do with that. I’ve been to conferences in the past where I gained a lot from hearing what fields there are and what work is being done. That’s a big reason why I wanted to go. I’m also on the executive board for the Women in Technology Club for undergraduates. Along those same lines of being a passionate feminist, I felt like it was a good idea to go to get those resources and know where they are for other women at DU. These sorts of conferences are huge and a little intimidating, but you always come away inspired and more excited about whatever your future in tech is going to be.

What skills or ideas were you able to bring back to campus?

Russell: To be able to see these women who are clearly very proud of what they’re doing because they’re presenting at this massive conference, to hear the steps they took to get there reminded me it can be a long process and that’s OK. Working toward a bigger picture goal is maybe more important than getting caught up on the “Is this the perfect move for me? Should I be doing this?” You can always be taking steps toward what you want to do.

Johnson: One of the bigger concepts I came away with was finding a balance between advocating for yourself but also not putting yourself in competition with other women. … You have to be an advocate for yourself, you have to work hard for what you want, but your first job is not going to be the one you stick with. You have to think about it in a bigger picture way. You have a path, everyone around you has a path. Try to find a balance between moving for yourself and moving the whole industry to a better place.

AR: I love the emphasis of lifting up other women [who] are also in tech instead of being pitted against each other.

Scott, what is it like seeing students like Anndi and Izzy attend and get a lot out of it?

Leutenegger: Amazing! Students come back totally jazzed. After attending they know they belong in computing. Their excitement is infectious.