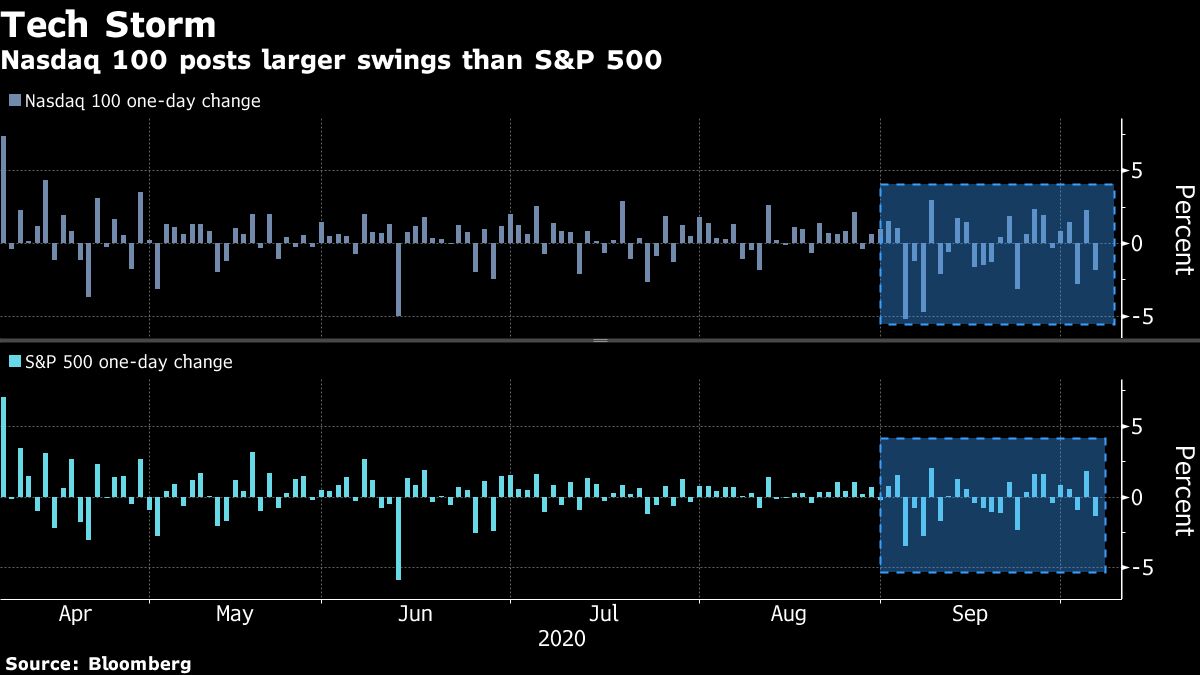 Traders piling back into megacap technology shares need to keep an eye on the options market, where still-elevated activity sets the stage for heightened stock volatility.

While the frenetic pace of speculation in derivatives has eased a bit recently, it hasn’t stopped, and a chorus of analysts warns the trading remains capable of exacerbating swings. Monday brought the biggest rally for the Nasdaq 100 Index since April, but measures of volatility rallied as well.

One proxy for the froth still latent in options, the percentage of overall volume represented by single-stock contracts, remains up 19% from a year ago, according to JPMorgan Chase & Co. Most of it is concentrated in megacap technology and momentum-driven shares.

Meanwhile, a large buyer of tech calls dubbed the Nasdaq whale recently resurfaced, purchasing around $200 million worth of call contracts on tech stocks in a single day. The Nasdaq 100 Index has gained in all but two sessions this month and just notched its best week since July after last month’s sharp drop. It’s up 3.3% as of 12:55 p.m. in New York on Monday.

The situation is another thing for traders to worry about in whipsawing markets where liquidity remains thin. Trading in options showed itself capable of influencing share movement in August and September, when dealer hedging — demand from people who sell options for the underlying stock — created feedback loops that helped drive the Nasdaq 100 higher. That dynamic can also add fuel to downside moves as well as sellers adjust positions.

Call open interest in Facebook Inc., Amazon.com, Netflix Inc., Alphabet Inc., Apple and Microsoft Corp. has averaged 12.8 million contracts over the 30 days through Friday, the highest since early 2019, according to data compiled by Bloomberg. Total open interest on the Invesco QQQ Trust Series 1 exchange-traded fund stands at roughly 8.9 million contracts, above the ETF’s one-year average of about 7.2 million.

While developments in the election and economy are no doubt raising anxiety levels, machinations in options are probably making things worse. The tech-heavy Nasdaq 100 has moved an average of 1.8% per day since the beginning of September, while the broader market gauge has fluctuated by 1.2% over that time period.

Recent options activity has been momentum-based, meaning that stocks tend to attract more interest in calls when it’s rallying versus when it trades lower, according to Susquehanna Financial Group LLP’s Chris Murphy. But if call strikes are triggered as a stock dips, that can amplify its fall, he said.

“Dealer hedging also has an impact when all the tech stocks trade lower through call strikes, and dealers don’t need their long stock hedges anymore,” said Murphy, a derivatives strategist at the firm.

Something else to worry about: the impact of speculative options trading on the options market’s more traditional role, as a hedge, particularly around events such as a presidential election. Investors are facing “violent” moves in options prices, elevated implied volatility and wider spreads in contracts as they seek to hedge against turbulence around the Nov. 3 vote, said Robert Knopp, co-head of Optiver’s S&P options trading team.

While buying protection around such an event is always costly, it’s been more expensive over the past two months due to the frenzy of call buying on tech stocks, according to the firm. Throw in structural forces that are contributing to a sustained high implied volatility environment, and election hedgers have their work cut out for them.

“We’ve certainly witnessed some imbalances in the U.S. options market in the lead-up to the election,” Knopp said in a webcast on Tuesday. Now, “the combination of this crisis potential and the process being drawn out are leading to some real anomalies.”

As of Tuesday, hedging the election was the “most expensive options event in the history of the VIX Index,” according to Knopp. What’s more, spreads in options that expire after election are wider than the firm would expect to see.

More broadly, options markets look different from a year ago, according to Karinvir Gill, a senior trader in Optiver’s Sydney office. There are fewer short-volatility players — options sellers, in other words — in the wake of the Covid crisis, which blew up many of these yield-harvesting strategies. There’s also less volatility selling by retail investors after the delisting of some popular VIX products earlier this year, he said.

All that’s helping to keep implied volatility elevated, according to Gill. “It could definitely be quite a few months or even a year or so for the imbalances to disappear,” he said.

Then there’s the resurfacing of the Nasdaq whale — spotted last week in block trades of tech call options — drew comparisons to late summer, when Japanese conglomerate SoftBank Group Corp. was revealed to be buying billions of dollars of call purchases in tech stocks. The money spent so far is dwarfed by this summer’s purchase and the whale hasn’t been spotted this week. But the possibility that there’s more to come will keep traders on their toes.

“What the impact is remains to be seen, but if the flows continue, it’ll certainly make the market jittery and it certainly puts a floor under tech implied volatility for a while,” said Stuart Kaiser, head of derivatives research at UBS AG.

One key starring player in last month’s option frenzy has so far stuck to the sidelines: small investors. At the peak of the craze, retail traders spent more than $511 billion in notional value on call options, data from the Options Clearing Corp. compiled by Sundial Capital’s Jason Goepfert show. That figure dwindled to $343 billion in the first week of October.

Retail traders tend to buy less-expensive short-dated contracts, according to BTIG LLC, which tend to have greater convexity and ability to exacerbate share movements. But even with muted participation from individual investors, the dealer hedging pressure will still be “intense,” according to BTIG’s Julian Emanuel.

“The dealer positions continue to exert pressure in both directions,” said Emanuel, the firm’s chief equity strategist. “These moves are in all likelihood going to be slightly less gappy, because the public doesn’t have as much interest in short-dated options, but that doesn’t make them any less intense or any less back-and-forth.”

— With assistance by Yakob Peterseil